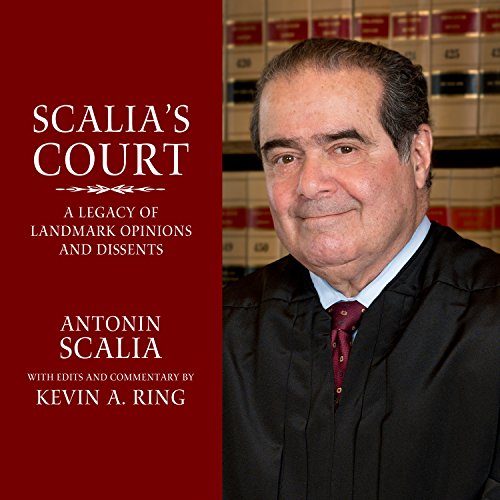 The sudden passing of Justice Antonin Scalia shook America. After almost 30 years on the Supreme Court, Scalia had become as integral to the institution as the hallowed room in which he sat. His wisecracking interruptions during oral arguments, his unmatched legal wisdom, his unwavering dedication to the Constitution, and his blistering dissents defined his leadership role on the court and inspired new generations of policymakers and legal minds.

Now, as Republicans and Democrats wage war over Scalia's lamentably empty Supreme Court seat, Kevin A. Ring, former counsel to the US Senate's Constitution Subcommittee, has taken a close look at the cases that best illustrate Scalia's character, philosophy, and legacy. In Scalia's Court, Ring collects Scalia's most memorable opinions on free speech, separation of powers, race, religious freedom, the rights of the accused, abortion, and more and intersperses Scalia's own words with an analysis of his legal reasoning and his lasting impact on American jurisprudence.

"[Scalia's] writings - with their plain language and constitutional moorings - will guide generations to come." (Speaker of the House Paul Ryan)

Understand the conservative philosophy of original

This book contains excerpts for important opinions over his career on the Supreme Court. The selection of excerpts and the text that introduces them flow very well together. The narration by David Drummond is very good.

I listened to find out who a leading conservative thought on issues that come before the Court. The book opens with Scalia explaining how he seeks to understand the intent of the framers. He explains that we should use the contemporary meaning of words when interpreting the text of the constitution, amendments, and laws were passed. He rejects the use of statements made during the debate, as they may not reflect the majority of the body that adopted in the final text. To find this original intent of the words and phrases, he examines dictionaries and other texts written in the same period to understand the meaning.

From Scalia's originalism philosophy gives me the sense that if you disagree with the court’s opinion, then you should work to amend the constitution. In short, constitution amendments should be more common. And hence the Justices would be bound by these new amendments and their decisions would have to change.

Now that I understand his approach and thus how he reaches his conclusions, I would like to see a liberal Justice on the Court publish excerpts from their opinions and explain how they interpret the Constitution, its amendments, and laws passed by congress.

This was an easy listen, I always love to listen to the rationale behind some of Scalias written works, narration was also good

Scalia likes the sound of his own voice

I actually had purchased and returned this book years ago. I since became more interested in the Supreme Court, and having forgot about my earlier purchase bought it again. I started listening to it and realised my mistake. Unfortunately my feelings did not change. Though he has a great mind, he is so long winded and gets too personal regarding the other justices in his opinions that it was almost as hard as last time to listen to. As I said I had since became more familiar with some of these cases so thought I would be more interested, but this man loves to hear his own voice too much and lost interest 1/3 way into each of his drawn out opinions and was not able to finish it once again. I don't know if there is a famous person who said this or not but, "Do not say with many words what only needs a few". I dare not return it for a second time.