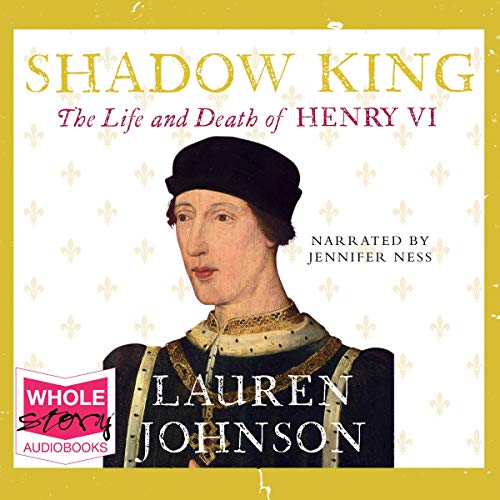 A thrilling new account of the tragic life and troubled times of Henry VI.

Firstborn son of a warrior father who defeated the French at Agincourt, Henry VI of the House Lancaster inherited the crown not only of England but also of France, at a time when Plantagenet dominance over the Valois dynasty was at its glorious height. And yet, by the time he was done to death in the Tower of London in 1471, France was lost, his throne had been seized by his rival, Edward IV of the House of York, and his kingdom had descended into the violent chaos of the Wars of the Roses.

Henry VI is perhaps the most troubled of English monarchs, a pious, gentle, well-intentioned man who was plagued by bouts of mental illness. In Shadow King, Lauren Johnson tells his remarkable and sometimes shocking story in a fast-paced and colourful narrative that captures both the poignancy of Henry's life and the tumultuous and bloody nature of the times in which he lived.

“A well-crafted moving account of a tragic reign.” (Michael Jones)

What listeners say about Shadow King

Stunning biography of a terrible King

This is a wonderful work about a decent well meaning man who led England to ruin both politically and militarily. The author does an excellent job of combining empathy for Henry as an individual and the circumstances he inherited with an unsparing evaluation of his utter failure to address any of the problems facing England. I have read/listened to many books on wars of York and Lancaster and this book ranks up there as one of the very best. Henry is placed squarely in the context of his times and all the leading protagonists are also. In the end you end up feeling sorry for most of the people who tried and tried to make a success of Henry's reign and to maintain the House of Lancaster in power. Even the Yorkist lords appear to have tried but Henry was just never going to be even a semi competent king. But it does provide the basis for a wonderful work of both scholarship and biography

Well researched but a few problems with the performance

The content is terrific but there are a few problems with the performance. Whilst the voice of Jennifer Ness is easy to listen to, and then itself very pleasing and not at all irritating, there are problems with pronunciation. Alnwick is pronounced as it is spelled and not as it should be, a·nuhk. Anselm is Anslem. I know this sounds picky, but over the length of the book, repeated mispronunciations do become very irritating. Surely there is a producer who can put the narrator right on these things. Surely the author listens to it and offers feedback. There are many more examples that don’t jump to mind. I really can’t blame the narrator who reads beautifully otherwise. But the producer must check out these pronunciations.

Engaging exploration of this troubled King

I found Shadow King to be a very accessible telling of the life of Henry VI. I've read quite a few histories of this period and often found them to be impenetrable, the Wars of the Roses can be very confusing blur of names and titles. I feel the success of Johnson's book lies in her ability to look at Henry VI as a person, and through trying to understand the man it makes it far easier to understand the turbulent period that he ruled over (and didn't when he was incarcerated!).The clearly extensive research is also complemented and brought to life by Johnson's natural storytelling. My only slight quibble would be with some of the pronunciations of names and places, but in the grand scheme of things that's a very small quibble indeed. I would highly recommend Shadow King

While you might expect a biographer to have a degree of sympathy for their subject, I felt this author slipped too far along this track and failed to give a fully rounded report of Henry's faults and, therefore, did not give adequate coverage of the blame he should bear for such a disastrous reign and, ultimately, for losing his crown.
But that is a minor infringement compared to the appalling narration. The narrator's awful mispronunciations of names and places (both English and French) were painful to listen to - but even worse were her mistakes when using everyday words. For example, she pronounced "Emissary" as "emIssary" and "feted" as "fetid".
Very disappointing.

What a great book. Lesser known history narrated brilliantly and written in an engaging way. Can recommend!

Very well performed. I thought I knew my History, no idea that Henry directly involved.

Lots of info about neglected or overshadowed monarch. Very enjoyable and lively. a good read.

Narrator pauses
in all the wrong places which is irritating just as you think there is a full stop end of sentence a few more words are spoken without acknowledging the next sentence by a correct pause. Most irritating of all is the incorrect pronunciation of French place names. Lastly it is Burgundy not BUNgandy.