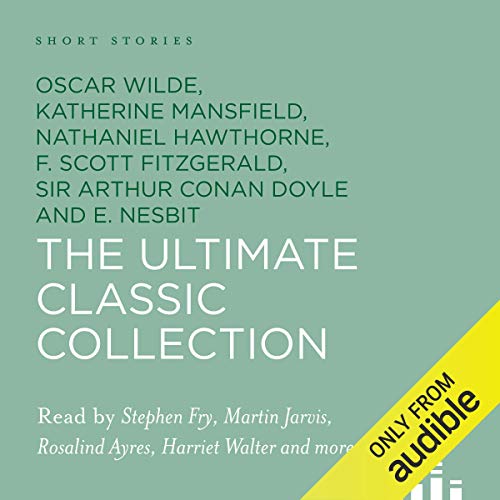 The Ultimate Classic Collection is drawn from our extensive back catalogue of over 300 short stories and showcases some of the finest examples of the genre: from romance to horror, detective and crime stories to the best of women's writing.

The stories in this superb collection are as follows:

What listeners say about Short Stories

excellent collection . goodnarration.
however chapters do not correspond to stories.
difficult to select and listen to a story.
for some stories the narrator even does not tell the authors name.
disappointing to see such basic flaws in this format.

I find this book fascinating. There is Drama, Mystery, History, a little of comedy, one story,"The Cat Who Walked By Himself" by Kipling is so full of imagination it is unbelievable. I have listened to it many times and am not tired of it yet.The reader did an excellent job, also. The only story I had read previous to acquiring this one is Poe's "The Black Cat". The other stories in the book are not the mainstream that you see everywhere, Like "The Girl from Arles"-or at least I had never read it before. This book was well worth the effort to get it and continues to entertain me.

This is a nice collection of short stories read by different readers (among them I recognised Hugh Laurie and Stephen Fry).
The only annoying thing is that they don't always say who is going to read it and I'd like to hear this as well, so I can go out and look on audible for more books that are read by these people...

wonderful collection! some were quite sensational! worth listening! Most of the horror and suspense stories were quite gripping.

Well written and well read but the stories are dated and not especially edifying.

I enjoyed listening to this very much. And a.big. Thank you to all of you.

interesting stories that culminate to a disappointing climax. Sorry about the review the book wasn't for me.