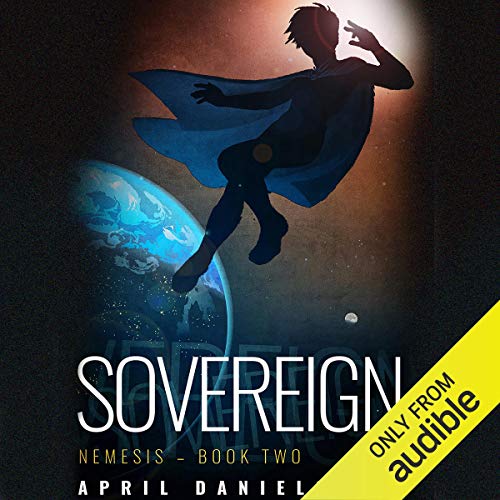 The highly anticipated sequel to Dreadnought, featuring "the most exciting new superheroes in decades." (Kirkus)

Only nine months after her debut as the superhero Dreadnought, Danny Tozer is already a scarred veteran. Protecting a city the size of New Port is a team-size job, and she's doing it alone. Between her newfound celebrity and her demanding cape duties, Dreadnought is stretched thin, and it's only going to get worse.

When she crosses a newly discovered billionaire supervillain, Dreadnought comes under attack from all quarters. From her troubled family life to her disintegrating friendship with Calamity, there's no lever too cruel for this villain to use against her.

She might be hard to kill, but there's more than one way to destroy a hero. Before the war is over, Dreadnought will be forced to confront parts of herself she never wanted to acknowledge.

And behind it all, an old enemy waits in the wings, ready to unleash a plot that will scar the world forever.

What listeners say about Sovereign

Better than the first one

Oh Dionysus, this was a great novel. There were times where I kept pausing it to draw out the pleasure of the experience, or because the emotions got too intense for me. The world-building is as phenomenal as ever. The characters are rich and complicated. We really get to see Danny struggling with her character flaws and inner darkness. The Nemesis stuff I feel a little uneasy about, but I'll have to see how the author realizes that later down the road. Most of all, I'm glad that this novel got a proper epilogue compared to the abrupt stop of the first novel.

Also like...
I'm a cisgender man, and maybe this isn't my place...but this author GETS IT. This author understands suffering, and trauma, and self-loathing, and in those ways I was really able to relate to Danny as a character. Honestly? This book helped me with my own issues a little.

Danny is the superhero we need even though we, as a civilization, haven't done enough good to deserve her. Fictional or not, she has already saved many real human lives.

I loved this book

April Daniels did a fantastic job with this book. It picks up where Dreadnaught finished and Danielle encounters the stress of being a superhero and instant celebrity while battling her own demons and rage from years of abuse at the hands of her father and peers. I love having a superhero whom I can relate to and the story is gripping. I couldn’t stop listening.

This one had me worried a few chapters into it.

I almost shut this one off and returned it a few chapters into, but I'm glad I didn't.

The problem is that Danny, at least in the first few chapters, it completely full of #2. So much so, that I felt like I was listening to some sort of deranged manifesto. In particular I found the bits about enjoying violence very off putting.

This is a delayed-thesis book, so the main character grows through regret and suffering. Which reverses all of that in the end.

Soudek's preformance is great, and I won't dock her any point for this, but she seems to have run out of male voices. Notably Charlie and Sovereign sound the same.

In important technical note, I could not get this title to stream, I tried it on 2 fire tvs and a pc, but streaming this title specifically caused player errors every five seconds. I was able to download it to an android tablet and it played fine from that.

I found myself disappointed that Danny never losses her powers (forced back in a male body). This felt like a pulled punch. I mean it would have been traumatic, and I would have cried, but it would have raised the stakes exponentially.

I really liked the bit at the end with Doc Impossible and adoption and hope that goes somewhere (maybe Her parents force the issue?).

What is it with rich people and seasteading? This rung true. I've known two rich guys who were very into this, and one of them, more or less, turned out to be a supervillian.

kind of a let down

I really liked the first book. which made how much I didn't like the sequel kind of jarring. Danny went from being this sympathetic and inspiring charecter to being kind of a bitch that I didn't mind not rooting for. I feel like the title should have been; How I almost became a psychopath mass murderer. or maybe ;How I almost became a super villan. I mean I understood the reasons but at the same time she had a great support system and everyone that "turned their back" was because she had changed her personality.

To be honest i was a little hesitant about getting Dreadnought,I am glad I did!! I love the genre and mixing magic in with it another genre I love was great! The whole finding one self in these two books was a different perspective I haven't experienced before and was well done.I think the main character was a little self absorbed but hey who wouldnt be.... got to read the books to find out why! I would like to learn more about Codex would be fun to see how a Prodigy does in a Meta Human world!

the story is compelling, sweet, actionaction-packed and fits in with the current social climates all at once. Loved it!

Damn this book for being so good.

I'll be dammed if I don't want to go back and actually buy both of the books in this series. excellently written and read. like the hero the sidekicks hell even the villains were/ are great (for hating and wanting them defeated) EXCELLENCE.

Second verse, same as the first

by which I mean this book is unbelievably good. chewed through it all in 2 days and my only regret is that its over now. Eagerly awaiting a part 3.

this series just keeps geting better and better.
incredible story and more details to their past

Great voice actor, great story, great characters. Worth your time and dime. This story does what super hero stories do best: tackle on actual social issues through a lens allowing people from all walks of like to experience a side of reality they’ve never explored. It’s great how this story uses gender and sex fluidity as a central part of the plot.

I couldn’t possible write a review to describe how I feel about this book. It is truly spectacular. Daniels has absolutely knocked it out the park and created a beautiful sequel to “dreadnaught”.

I myself am a trans woman and it warms my heart to have a character I can connect with so deeply. The fiction serves as a most perfect form of escapism.

The emotional undertones and character details draw you in and Daniels is not afraid of tugging on the lattice of your heart to make you feel emotions like no other piece of literature.

I cannot tell you what this book means to me, and I eagerly await the conclusion to the nemesis trilogy.