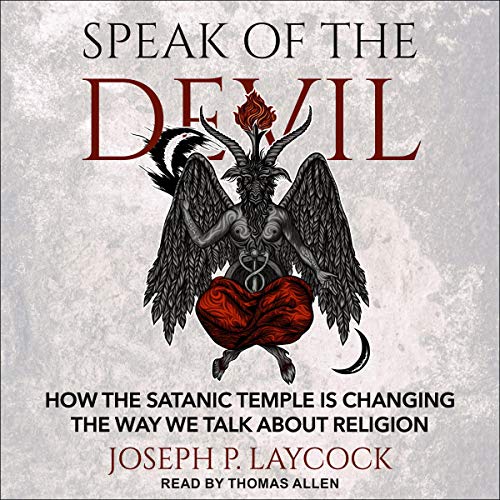 Speak of the Devil

In 2013, when the state of Oklahoma erected a statue of the Ten Commandments on the grounds of the state capitol, a group calling themselves The Satanic Temple applied to erect a statue of Baphomet alongside the Judeo-Christian tablets. Since that time, The Satanic Temple has become a regular voice in national conversations about religious freedom, disestablishment, and government overreach.

In addition to petitioning for Baphomet to appear alongside another monument of the Ten Commandments in Arkansas, the group has launched campaigns to include Satanic "nativity scenes" on government property in Florida, Michigan, and Indiana, offer Satanic prayers at a high school football game in Seattle, and create "After School Satan" programs in elementary schools that host Christian extracurricular programs. Since their 2012 founding, The Satanic Temple has established nineteen chapters and now claims 100,000 supporters. Is this just a political group perpetuating a series of stunts? Or is it a sincere religious movement?

Speak of the Devil is the first book-length study of The Satanic Temple. Joseph Laycock, a scholar of new religious movements, contends that the emergence of "political Satanism" marks a significant moment in American religious history that will have a lasting impact on how Americans frame debates about religious freedom.

What listeners say about Speak of the Devil

Excellent book about a misunderstood topic!

As a member of TST, it’s wonderful to read a book by someone who actually took the time and effort to really understand us.

What a fabulous book. Really enjoyed it. Made me even more proud to be a satanist!
Laycock lays out everything in an unbiased manner. Presenting the history, troubles and future of the Satanic Temple from a scholarly outside looking in.
Highly recommend. Also an excellent reading of it.

Really in depth look in The Satanic Temple, Satanism and religious majority/ minority issues. I learned a lot. Explains why TST meets the definition of a religion and why it really is one too.

It also talks about the hypocrisy of our country’s religious “freedom”. I would definitely recommend.

Speaking of the devil?

A well researched & written expose of the flip flopping of politics & religion & how if either side gets the upper hand the other faces oblivion with as much shame as possible.

I was very happy to learn about this book and hope that those that don’t understand TST can read this and truly understand this religion!

The author obviously invested a great deal of time and energy in studying modern satanism. I particularly appreciate the unwavering commitment to analyze religious satanism from an unbiased perspective. Ultimately they conclude that not only is modern satanism a real and valuable religion, but they take the time to break down and question the criteria and sources used to judge such an argument, while also explaining the significance of Satanism's contribution to society. (Massive props to the narrator for not laughing when reading the intellectual description of 'twerking'.) 10/10 recommend. I will be listening again and following up with several of the source materials the author uses.

A Great book to read about the TST

I'm not a member of the Temple of Satanism, but I've been on a journey of sorts learning about the TST, and I found this book extreamly helpful and knowledgeable about the topic. if you are curious about the TST either wanting to join, or just wanting to know what its all about this is a fantastic piece of literature to start with. good narrator too.

A great timeline on the start of the Satanic Temple and the principles followed by non theistic Satanists.

Highly recommend this book. Excellent content and read clearly and engagingly. If you have any curiosity toward the history of The Satanic Temple- this is your book.

very educational and a great listen

I have listened to a lot of terribly voiced audiobooks in the past. this one was great. tons of information, very well researched, and the author seems to actually care about understanding TST's mission. highly recommended

haven't got all day to nit pick every single issue with this narrative but what I get from the book is that people on the left of the political spectrum wanted their own religion to essentially subvert religious freedoms of any other faith away by claiming they are a religion of people who follow Satan (adversary) opposing people of every other faith whilst then also claiming to be mainly atheistic... so you don't worship Satan as a literal God so you follow adversaries to the communities then and wonder why people are against you, you pit yourselves against them just with the terminology you are using and that is not just Christians but any other faith that has a "Satan" figure, I believe troll is quite accurate and that's coming from someone not in a mainstream religion. seems to me they are just social justice warriors and try hards.

This book was so incredibly eye-opening, I learnt so much from it and it's so well put together, fantastic. I highly recommend it if you're interested in this topic. And the narrator was great!

What a great book!

A must read book. It's fascinating and thought provoking. If you are interested in the true state and meaning of religious freedom, this is for you.