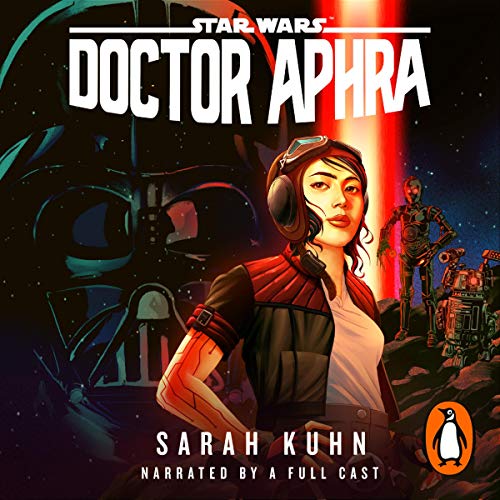 A pioneer in the field of criminal xenoarchaeology, Aphra recognises no law, has no fear and possesses no impulse control. To her, the true worth of the galactic relics she discovers isn’t found in a museum, but in an arsenal. This viewpoint has led to a lot of misunderstandings. After her latest plan goes horribly wrong, her criminal past is on the verge of catching up to her, when suddenly Darth Vader, terror of the galaxy, swoops in with his lightsaber ignited and...saves her life?

Don’t get her wrong - it’s not like she’s ungrateful. Sure, her new boss is a lord of the Sith. And OK, she may have just become a pawn in a deadly game being played by him and his boss, who happens to be the Galactic Emperor. And yes, the life expectancy of anyone who disappoints Vader can be measured in seconds.

But she’s back doing what she does best. She’s got a ship to fly, a heist to pull and two unorthodox but effective metal buddies: Triple-Zero, a protocol droid specialising in etiquette, customs, translation and torture, and BT-1, an astromech loaded with enough firepower to take down a battlecruiser. Together, they might just find a way to get the job done and avoid the deadly performance review that waits at its conclusion.

Story is ok, but the performance is so good it dont mather!

A great retell of a great story

I'd say they are going into right direction with these audiobooks, although I think there are improvements to be made.
For example, the voice acting was brilliant in my opinion. However, I think they could find more fitting voices to certain characters. Especially if those characters are likely to appear in future audiobooks.

And then there is the story. It's based on Marvel's Darth Vader comics from 2015, which was one of the best comics series (in my opinion), but I never felt like it needed to be retold from a slightly different perspective. On the other hand, it's nice to listen to this and follow the comics in the same time for visuals. Because they used the same lines here as in the comics it was quite simple to do so. However, it also means they sold us the same story the second time. With a few addition to be fair, mainly from Aphra's past, but in the galaxy so rich as Star Wars, I would really prefer new epic stories.

For people who are considering buying this audiobook, I'd suggest that there are better Star Wars audiobooks and you can still get this story in a different format. However, if you really want Doctor Aphra's story in audio format then you are still getting a pretty decent product (in my opinion).

Most annoying narrator ever

If your liking to induce a headache and listen to more annoying character than Jar Jar, then it's a must!

Having read the comic books I know the story well. This covers the Darth Vader comics that are set before. This is a good production, however Aphra makes the original film characters who appear, to be idiots. This is not the fault of the cast. If a production is made of the actual Aphra comics then this would be better. A good first attempt.

loved it! What a great introduction to a brilliant character! Acting and production were also very high quality!

I didn't expect this!

This is a new take on Star Wars storytelling. Whole book is actually a recording of Dr. Aphra and her (mis)adventures and Emily Woo Zeller gave her all the character she needed.

This is not an audiobook, it's a radio drama. Which is a good thing. Another fantastic performance is Marc Thompson as Darth Vader, but the rest of the caat was good too.

This novel is fast paced, tense, very often with some funny moments and it has everything a good Star Wars book needs. Recommended.

I'm just sad it's over and I want more of Dr. Chelli Lona Aphra. I think I will delve into comics now. :)

Very poor Star Wars store. Ok for the younger listeners but I was very disappointed. Do not waste your time listening to this recording if you are over the age of 12.😔

it's something I guess

Main character is rather annoying and rambling but I guess that's supposed to be the "charm" the acting is alright and story is ok. Not sure I'd listen to it again but hey it's more Star Wars and still better than the recent movies at least for sure.

I loved this story! It's Star Wars so the sounds were immersive and the performances were well done. But Doctor Aphra is a fantastic character too. So sure of herself and with some tragic flaws she occupies the grey area in Star Wars morality.

Really enjoyed the quirky, fun but vulnerable character of Doctor Aphra along with her droids who act as complete opposites to C-3PO and R2-D2. Great story detail on Darth Vader too, along with the original trilogy heroes thrown in for good measure!

Overall I enjoyed it

The story telling was really good, sound effects in the background were a welcomed addition for me .

Doctor Aphra is definitely one of the recent standout characters. While there are some hit and misses in this story. It definitely is something, the acting, the sound effects, the new characters such as Triple 000 and BT are definitely standouts. It is worth listening to

Doctor Aphra’s story picks up between A New Hope and TESB - it includes so many of our favourite characters and is performed in such an amazing way! This is my favourite audio drama I’ve listened to! The music was on point, the jokes always landed and I am now obsessed with Triple Zero and Aphra!! I highly recommend this story!

I reckon I do not finish about 90% of the Star Wars books I have tried to read. Aphra is different, witty, fun, and 100% finished. And, narration is the best. Better than a movie.

i cant describe just how good this is. do yourself a favor and buy this fucking book