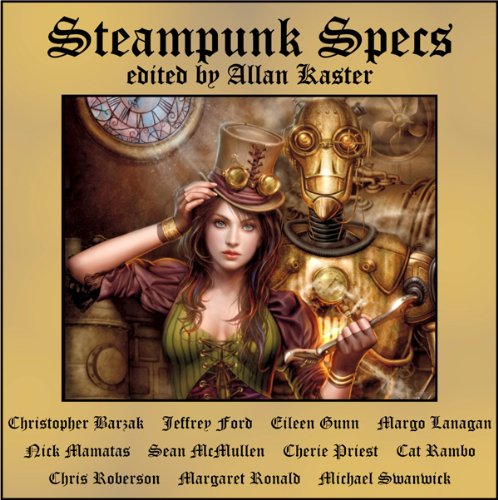 This collection of unabridged, spectacular steampunk speculations includes several classics of the genre. These tales will sweep you away with their amazing automata, daring dirigibles, grinding gears, and scintillating steam as days gone by are infused with tech. In "Smoke City," by Christopher Barzak, a woman comes to terms with the loss of her family to the child labor mills of the city. A doctor tries to cope with a strange plague terrorizing the citizens of London in Jeffrey Ford's "Dr. Lash Remembers." In "Machine Maid," by Margo Lanagan, a sexually repressed wife gets revenge on her husband through a robot maid. Friedrich Engels strives to spread class revolution as a labor organizer for factory cyborg matchstick girls in "Arbeitskraft," by Nick Mamatas. In "Ninety Thousand Horses," by Sean McMullen, an acclaimed mathematician, with a murky past, is forced to spy for an industrialist prior to becoming Britain's foremost rocket expert during World War II. An orphan boy builds an automaton, in an aging scientist's laboratory, that becomes more than an idle companion in Cherie Priest's "Tanglefoot (A Clockwork Century Story)." In "Clockwork Fairies," by Cat Rambo, an English aristocrat courts a woman who would rather spend time in a laboratory than at high society balls. At Chicago's Columbian Exposition, in 1893, an Algerian bodyguard crosses paths with a disoriented naked man in Chris Roberson's "Edison's Frankenstein." In "A Serpent in the Gears," by Margaret Ronald, a dirigble journeys to an isolated land and discovers people and animals merged with machine parts. Radio Jones finds a way to listen in on the Naked Brains, who rule the world, while Rudy the Red fights against the oppressors in "Zeppelin City" by Michael Swanwick and Eileen Gunn.

What listeners say about Steampunk Specs

The nice thing about anthologies is that they're a great way to explore an unfamiliar genre, learn about authors you might be unfamiliar with, and to get some fun stories that don't require a full-length investment. If it turns out you don't like a story, move on to the next one without feeling like you've wasted your time.

This particular anthology didn't have any disappointing stories for me, and there were a couple that really stood out for me, so on the whole I'd say this venture was well worth my credit. The stories were well-crafted and well-told, and the performances served largely to improve them. The couple that stood out... they REALLY stood out for me and pushed this from a 3-star to a 4-star rating. There's a lot of fun here, but there are also some decidedly darker twists that I didn't expect, the kind of thing that haunts the reader that lingers on it a bit too long. Sometimes it's surprising how much punch a short story can have.

Not all of these stories were my steamed cup of tea. Maybe I am not privy to stories laden with emotion and woke tales, as many who fancy these tropes. The performances were stellar nonetheless. Dabbling from dripping tales of heavy clockwork miracles and tales of the times to fairies and magical sorcery, these stories do somehow string together for this volume.

Excellent variety of well-thought-out well assembled steampunk stories for any enthusiast. Maybe the only complaint I have is that the stories are so good I’d love to see them turned into novels. Excellent book, highly recommend

Uneven anthology with no underlying theme

Since there's nothing that binds these stories together, I will write a short review of each story:

Tanglefoot - Cherie Priest
This story fits into the alternative Civil War history first explored in Boneshaker and has elements of Frankentein, a belief in changelings, and posession. It's easy to immerse yourself in the setting, especially since the author provides a quick summary of the salient points up front.

Ninety Thousand Horses- Sean McMullen
Told in flashback, this is a fascinating story with an alternative view of the original development of rocket technology as a way to increase the speed of a railway.

Arbitescalf - Nick Mamatas
This is an alternative history of the worst abuses of the industrial age in terms of child labor taught from the viewpoint of Frederick Engles and the completion of thenext volume of Das Capital.

Machine Maid - Margo Lanagan
It's a long, pointless riff on a woman's sexual hangups. There isn't a single character in this story worth the time it takes to read about it. Unless you are a woman who hates both men and heteralsexual sex, this story is a total waste.

A serpent in the Gears - Margaret Ronald
An exploration of Cyborgs and society. I found this to be a carefully constructed, thoughtful story exploring clockwork cyborgs and their places in multiple societies viewed through the lens of an airship-based expedition from one society to another and told through the viewpoint of an enigmatic character whose full identity isn't disclosed until late in the story.

Dr. Lash Remembers - Jeffry Ford
If you're into hoplessness, this is for you.

Zeppelin City - Michael Swanwick and Eileen Gunn
This was the most polished, well-plotted story in the collection. A tightly woven story which excels in demonstrating the "Show, don't tell" rule of great writing and seamlessly transitions among three viewpoints to tell a single story.

Edison's Frankenstein - Chris Roberson
In Roberson's story the discovery of a new element called "Promethium" is the key to his setting. Promethium tanks ended the civil war at the Battle of Bull Run and William Cody is running a wild west show at the Columbian exposition. Since Promethium provided cheap, unlimited energy, the development of electricity was short circuited" and Thomas Edison was a minor engineer struggling to make electricity profitable, while Tesla was a minor science fiction writer. The title gives away the punch line, which is telegraphed throughout. The elements of the setting overwhelms the story. This author engages in long stretches of pointless exposition and is, quite frankly, boring. All through the story I was imagining how I would do it better, which is not a good reaction for an author too impose on a reader. While the Swanwick/Gunn story was a triumph of "Show, don't tell," this was a case study in failure to heed that dictum.

Smoke City - Christopher Barzak
This is more of a Lovecraftian set piece than a Steampunk story. It's hard to care at all for the first person point of view character, or anyone else, for that matter.

What disappointed you about Steampunk Specs?

What aspect of the narrators’s performance would you have changed?

There were too many narrators. A few of the narrators used horrible accents but then dropped the accent randomly.

What character would you cut from Steampunk Specs?

Most of the characters were flat and predictable.

Don't bother with this book!

A lively taster basket of Steampunk

Overall Narration was good. Some stories were more to my liking than others, but that is a good thing l think, help us all if everyone had my exact tastes. worth the credit, that's for sure.