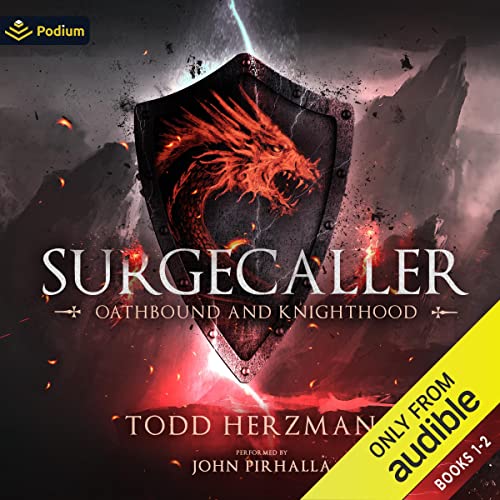 Contains books one and two of the Surgecaller series. Enter a realm with magical beasts, where surgecallers can cultivate essence to strengthen their weapons, enhance their bodies, and wield elemental magic.

How do you kill an Immortal?

Huon is weak. A surgecaller who escaped into the wilds, his only goal was to survive. Now he is Oathbound, forced to fight in an arena, forced to become stronger than he’d thought possible. As he realizes he can become strong, the need for revenge fills his heart, and a new goal forms in his mind.

But his goal is impossible: Kill the dragon rider, the Immortal of Fire. To succeed, he’ll have to do more than just survive - he’ll have to advance beyond anything the realm has ever seen.

Huon has reached the rank of Squire, taking the first step on his road to power, but he’s still far behind where he needs to be. Oathless once more, he ventures out of the Everlasting King’s realm with Liona, hoping to find challenges to spur on their advancement.

But freedom isn’t easy to keep, and their enemies pursue them even into new lands.

What listeners say about Surgecaller: Oathbound and Knighthood

rushed narration, storyline, pace. not a cradle successor even in spirit. I couldn't find myself investing in the characters.

the main character has like.... 5 lines and 4 of them are some variation of " I will be strong". I wanted to like it because of online reviews calling it a cradle successor but I couldn't find the will to continue listening.

The book overall was good, the only thing I found annoying is the MC never winning at anything. I am hoping it's to emphasize how far behind he is and that it will change as the books go forward. I looking forward to the next!

Solid YA fantasy. Not sure about some of the harsh reviews. I really enjoyed both books. I mean it’s YA fantasy not some literary statement on humanity. Can’t wait for book 3. The narrator held the story together with so many character voices.

the book read is a bizarre combination of pro-slavery and objectivisr propaganda. the pro slavery thing died by the end a little but the objectivist stuff stayed.

I was not sure about this story because of the lack of reviews, however I found it enthralling.

This guy!!!! He has no resolve. Overall not a total loss of a credit if you can get past this cry baby loser who pretends to be morally just. I personally want to put a bullet in the main character head to end him and put him out his misery. I will say enter at your own risk.

If you’re looking for the likes of Cradle, look elsewhere.

The book has some interesting ideas that could have been so exciting to see fleshed out, but doesn’t really develop any of them. The characters are flat and undeveloped and have even flatter and undeveloped mantras and motivations. The mc could die and I wouldn’t care much. The characters just aren’t relatable or lovable, and felt little desire to root for them. The only thing I wanted to root for and see was for the Mc to progress, to get stronger, and have fun moments where the fruits of that progression really show in a fun and exciting way. Unfortunately, for being called a progression fantasy, this aspect was startlingly lacking. Go Cradle, go Codex Alera, go Mage Errant, go TBATE, heck, go Thousand Li, all those are far better options in terms of world, characters, and story, imo.

Narration isn’t bad, but feels a little rushed. The flat character development is neither helped nor hurt by the relatively flat expressions the narrator gives characters, but there was nothing that made me cringe.

I really liked book one of the set. But book two was just one failure after another it says progression but I guess that means he progressively looses more and more? The end was the kicker he basically Gives up on all the stuff he pinned over the entire book until the last chapter he’s like well I guess I can still try. Yeah nope.