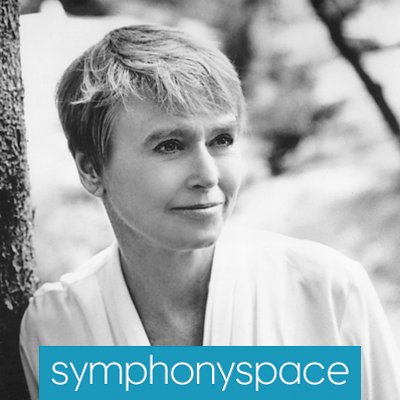 Susan Cooper talks with Symphony Space's education director about The Dark Is Rising sequence, her series of five thrilling fantasy novels for young readers, among them The Dark Is Rising and 1976 Newbery Medal winner The Grey King.

The heroic series, originally published in the 1960s and 70s, is inspired by Arthurian myths and depicts an epic struggle between good ("The Light") and evil ("The Dark") in which children like 11-year-old Sign-Seeker Will Stanton take part. (It also inspired the recent film adaptation, The Seeker: The Dark Is Rising.)

To begin this special event, recorded live at Symphony Space in New York City, actor Daniel Gerroll reads an exciting piece from The Dark Is Rising.

This event was recorded live as part of the Thalia Kids' Book Club series at Peter Norton Symphony Space in New York City. These events feature lively discussions between children's book authors and their fans ages 9-12, led by a variety of special guests. Each event includes a fun writing or drawing exercise, and kids' Q&A.

Beginning with an incredible reading/performance by actor Daniel Gerroll, this episode of Thalia Kids' Book Club introduces us to Newbery Medal winner Susan Cooper. Author of The Dark Is Rising series, Susan Cooper has enchanted children everywhere for decades and she proves to be quite the stage presence! Keeping with tradition, the Thalia Kids' Book Club also features an exciting new writing exercise great for both kids and adults. A must for any young person interested in having great literary conversations!

WARNING: This is NOT an audio book!!!!

What would have made Thalia Kids' Book Club: Susan Cooper's 'The Dark is Rising' better?

I am SO incredibly disappointed. I listened to the sample and verified it was someone reading aloud the book The Dark is Rising (1st book in the series) before downloading. However when I opened to listen, the first two minutes are of a woman introducing the man who proceeds to read aloud ONLY 2 PAGES OF THE BOOK which lasts a mere few minutes, then it becomes a question/answer session and discussion about the book. WHAT?!?!!! And Audible wants to charge me $14.95 for THAT??? You have GOT to be kidding me!

Very upset customer -- Audible and Amazon, please redeem yourselves and issue my 1 Credit back so I can please download an ACTUAL audio book, and please provide CLEAR warnings on content that is NOT an actual audio book -- which seems like the least you could do considering this site is specifically INTENDED FOR downloading audio books.

What was most disappointing about Susan Cooper’s story?

The fact that for my 1 audio book credit I only got to hear 2 pages of the book!!!

Would you be willing to try another one of Symphony Space’s performances?

NO! Please kindly reissue my credit so I may download AN ACTUAL AUDIO BOOK. Thank you.

Anger, frustration, and a very disappointed 9 year old who received a copy of the novel and was very much looking forward to reading along with the audio book together -- only to find out this "audio book" download only contains a mere 2 pages of the book read aloud, plus an hour worth of garbage I never would have knowingly downloaded.

I downloaded this fully expecting it to be part of "The Dark is Rising" sequence, and hoping to enjoy it with my family on days when the kids are off school. What I got was a review and an interview, neither of which is riveting in it's content, and a keen sense of disappointment. Please can I have an explanation as to why the book hasn't been turned into an audio adventure to keep the sequence together? And please, can I have a refund for this frankly poor imitation of entertainment.

What was most disappointing about Susan Cooper’s story?

It's not the book, nor a performance. It's more like a pantomime!

It's not the book, so the question is somewhat puzzling.

My initial reaction was best suited to those over the age of 21, and not of a nervous disposition. "Bitterly disappointed" is the most polite thing I can find to say about this product. I know the Susan Cooper books from my own younger days, and I know that the second book is crucial to the story cycle, so why don't you release it as a proper audiobook?

For fans of The Dark is Rising sequence, this workshop and interview gives a fascinating insight into Susan Cooper’s influences and writing process. It may also be useful for librarians and teachers who want to discuss the books with children.