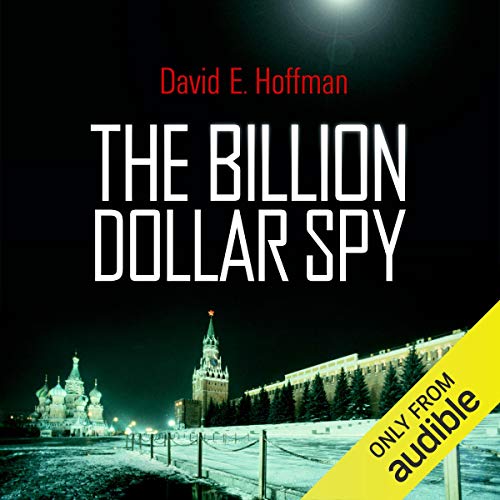 January 1977. While the chief of the CIA’s Moscow station fills his gas tank, a stranger drops a note into the car.

In the years that follow, that stranger, Adolf Tolkachev, becomes one of the West’s most valuable spies. At enormous risk Tolkachev and his handlers conduct clandestine meetings across Moscow, using spy cameras, props, and private codes to elude the KGB in its own backyard - until a shocking betrayal puts them all at risk.

Drawing on previously classified CIA documents and interviews with firsthand participants, The Billion Dollar Spy is a brilliant feat of reporting and a riveting true story from the final years of the Cold War.

What listeners say about The Billion Dollar Spy

Who on Earth is this narrator?

However this narrator is speaking in broken English and has the most enormous gaps between words and random pauses thrown in the middle of each sentence. It's incredibly off putting, like he's struggling to read the lines. It really ruins it. Play on 1.25 speed if possible to attempt to fix it.

Loved the story, but unfortunately I struggled with the narration...... strange breaks in the reading. Seemed to drag on as the story feels like it was pulled from pillar to post to fill it out a bit. Fascinating story, but didn’t like the presentation.

So interesting. Do read this alongside the other brilliant account covering UK’s intelligence successes The Spy and the Traitor.

awful voice over artists is

where no pause is necessary.

This makes for a very


They should rerecord the whole book with someone who knows


how to say more than three words

in the middle of a sentence.

Detailed account of true story of CIA spy in Soviet Union. The story kept me listening. But the reader almost caused me to give up. At times I wondered if the narrator was real or was a computer. Poor intonation, inappropriate pauses, and in places much worse than the directions provided by my satnav.

Great book and really well read. First time I have given 5 stars in each coloumn.

Espionage history at it's best.

I love this subject and this book is very good at describing the ins and outs of alot of what goes on whilst the CIA runs a high profile agent in the USSR. as the main subject is also little later on in the cold war, it's also little more current than some of the books about espionage that you come across. The side acts are also very famous spies, so I think overall people will enjoy this book as much as I did.

No doubt a thrilling story of event, but the repetition makes the delivery of the story boring. Maybe this was down the narrator?

Very detailed book, very well read. There is a lot to learn even for someone who has read a lot of books on this subject. Very real and felt dangerous.

Plenty of detail, no doubt painstakingly researched. But some strange editorial choices, with an odd section right in the middle that didn’t appear to fit at all. And, as others have mentioned, a reader who introduced un-needed pauses at random places. His narration threatened to ruin the story. Nevertheless, worth listening to right to the end.

So much information of a part of history I lived through but never knew. If not for that brave Russian spy Kolkachev (spelling?) I wonder where we in the west would be today. I am stunned by his achievements, his stubbornness and bravery and the bravery of CIA case handlers. This was my husband’s book but I very much enjoyed it and what I learned. Well read as this is not a fictional novel and I was kept interested throughout the whole book.