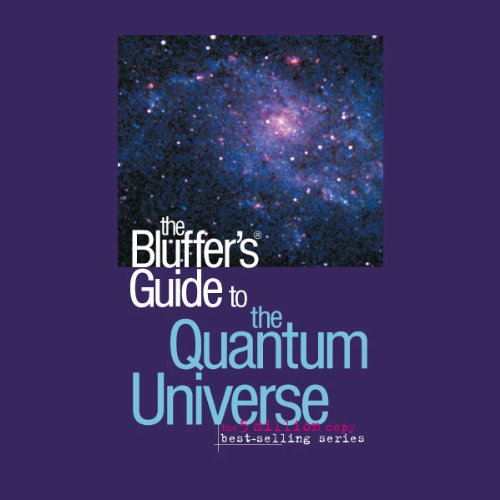 The Bluffer's Guide® to the Quantum Universe

Be an instant expert on the quantum universe and Bluff Your Way® in the subject with everyone you know. No science required, just a sense of humour. From 'gluons' to 'gravitons', and from 'certainty' to 'superstrings', here's all you need to know to sound all-knowing.

Extracts from the book:
Quantus
The study of subatomic particles is called quantum mechanics. This is strange because the word 'quantum' is derived from the Latin noun 'quantus' meaning 'how much'. In this case, not a lot. And it can be seen within a nanosecond that it is entirely alien to this subject to talk of anything 'mechanical', 'mechanistic' or 'machine-like'.

Quantomime
Einstein, whose work with light and electrons had opened the curtains on the whole quantomime, wavered between calling quantum mechanics 'incomplete' and declaring its ideas to be 'the system of delusions of an exceedingly intelligent paranoiac, concocted of incoherent elements of thought'.

Quantity
All matter can be broken down into atoms. Atoms are small. They are smaller than affordable apartments in Manhattan, they are smaller than portions at the Ritz, they are even smaller than the chance that a politician will be honest. The full stop at the end of this sentence will be a tiny blob of ink about a millimetre wide which will contain close to four billion atoms.

Quantifiably
Never commit yourself about the outer limits of the Universe or the quantum realm even to a 'probably'. Anything you utter with certainty, or declare to be 'probably true' could return to haunt you and, it can be said with confidence, probably will. If you know what's good for you, a 'possibly' is the farthest you will go.

"With the vital information from these books there should be no subject upon which you can't give an informed opinion (or at least one that sounds informed)." ( Aberdeen Evening Press)

What listeners say about The Bluffer's Guide® to the Quantum Universe

Would you listen to The Bluffer's Guide® to the Quantum Universe again? Why?

I plan on another listen soon. The delivery of the subject matter is great.

Serious science delivered with a side of humor.

What does Jack Klaff bring to the story that you wouldn’t experience if you just read the book?

By listening to the author reading his own book, you get the full experience of what he was writing.

I am a physics student myself, and I do listen to a lot of physics and science books. However, is the first time I laughed so hard when listening to complex concepts -which the author, by the way, manages to make real simple and mundane.

I truly recommend this book. Its very well written and engaging, and is a fascinating topic. Whether you know your science or not, it won't matter, after listening to this book you will feel that you truly have a good understanding.