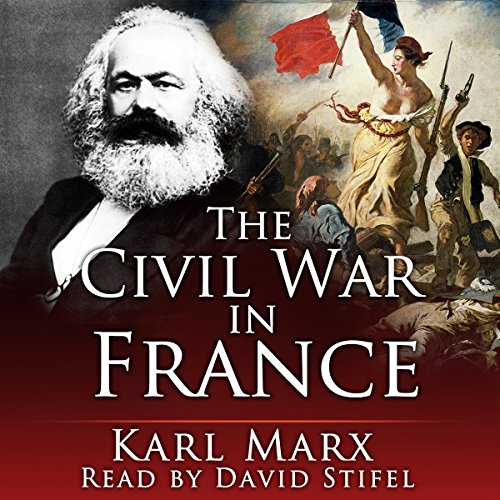 In 1871, the Franco-Prussian War was raging. The workers of Paris, fed up with a government that had begun the hated war, and the exploitation, repression, and abuse of "their" government, took matters into their own hands. They instituted the Paris Commune - of, by, and for the workers.

Observing these events through news reports of the time, one of the foremost thinkers of the 19th century, Karl Marx, made three speeches to the International Workmen's Association. He reported and analyzed this workers' revolt against their masters, with thoughts that are still fresh and sadly relevant today.

The 1891 introduction by Fredrick Engels has some very spooky passages about the inequality of the classes not only in monarchical Europe, but also in the "democracy" of the US. In light of 21st-century American events, this material shows that the more things change, the more they don't. Vive la revolution!

What listeners say about The Civil War in France

A truly Great book on the Paris commune. Karl Marx writes well and with clarity on the subject. If you are going to buy this book I would recommend reading up on the Paris commune and the Franco Prussian war because Marx assumes that the reader is a contemporary who is versed in the politics of the 1800s. If you like this book you should read Marx’s the 18 Brumaire of Louis Napoleon it his best text on French history

If you're interested in working class history or this particular shrouded moment in history this is a great work. There are a few editing errors

The Civil War in France

This was a good read.So many ideas and relatable incidences.David Stifel was a great narrator.I was voluntarily provided this free review copy audiobook by the author, narrator, or publisher.”

Written during and after the Paris Commune 1871.
Key lessons on the state and revolution.

the Narrator really preforms the work, saving Marx's ferver from the austerity of lattee caricatures.