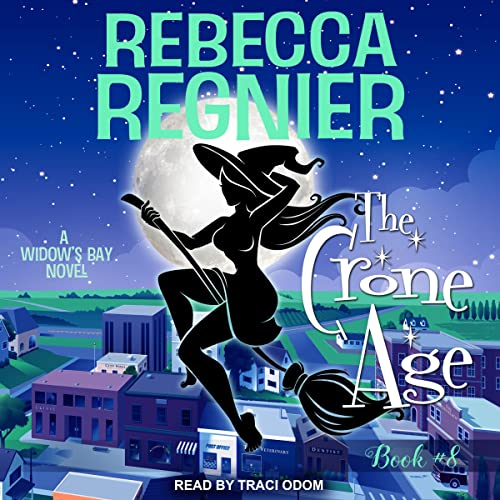 In Widow's Bay, when someone calls you a crone, it's a compliment.

Menopausal witch Marzie Nowak is waiting for someone, anyone, to say she looks too young to be a grandma. But looks aside, her brand new grandbaby is rocking her world. Too bad everything else in Widow's Bay is upside down. There's a dead body, a haywire wand, and her beloved magical cat has been hexed! Between that and an ex-husband who's decided to move in on her turf, Marzie's feeling very much the crone.

Plus some new faces have moved into Widow's Bay and they're giving the Distinguished Ladies Club a run for their money. With a possible killer on the loose and everyone around her acting strangely, the pressure is on Marzie to sort things out. Big changes are afoot in Widow's Bay and in Marzie's family.

Don't miss the epic finale as empty nest witches team up with handsome vampires and flirty shifters in the most magical town in Michigan.

If you like clever heroines, snarky humor, and supernatural small towns, then you'll love Rebecca Regnier's bewitching mystery. Paranormal women's fiction fans will want to move to Widow's Bay. Where a hot flash means a witch is just getting warmed up!

What listeners say about The Crone Age

What a magnificent ending to a great series!! I loved this series, I'll definitely miss more, but this ending was perfect. Lots of joy, frustration and some tears in this final edition, but definitely a HEA!!! The Crone Wars was the cherry on top of this series!! Traci Odom's narration is superb!! lHighly recommend this entire series!!! ❤❤❤

A new grand baby is just the beginning of changes and challenges Marzi faces in this latest Widow's Bay adventure. A neighboring town, cookie cutter businesses, and new faces in familiar places are wreaking havoc with Widow's Bay businesses, to say the least, but everything is fine, just fine. The coven's psychic connections are on the fritz, but it's fine. What is happening, and why is Marzi the only one who doesn't think it's fine. The times, they are a changin', it seems.

I loved it but really would have liked to see more of Etienne. Nonetheless, hang on to your broomstick. It is a wild ride.