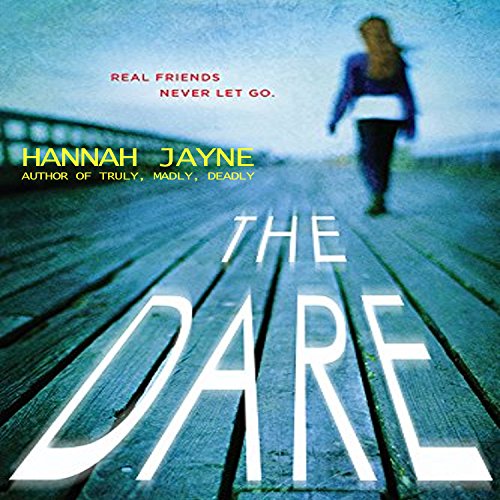 She made the dare. Now she can't face the truth.

Brynna and Erica were friends, best friends. They did everything together, until the night they jumped off the pier at Harding Beach...and only Brynna made it back.

A year later, Brynna is still picking up the pieces. She's in a new school with new friends, but she can't shake the demons of her past.

Then a Twitter post from "EricaNShaw" pops up in Brynna's feed and a chilling voice mail is left on her phone. Someone isn't ready to let go of what happened. Brynna barely survived losing Erica. She doubts she'll survive Erica's return.

What listeners say about The Dare

This is not my usual type of audio book. I have other books by this author and enjoyed them. I decided to give this one a listen. The plot and characters develop well. The ending was a let down. There is the hint that the death of Erica was influenced by bad judgement due to alcohol. Then a minor character shows up. His behavior is altered from previous story dialog. The ending is left kinda open. You are told a probable but not certain end for him. The supporting characters just show up at the climax. Their reason for showing up is weak. The author should have said a little more about how Brynna was secured by the villain. How Brynna got loose is not possible under normal circumstances. It takes a big stretch of the imagination to agree with that. What I enjoyed was the write up for a teenager who has a sudden traumatic experience. Brynna is trying to work through her guilt for living, after turning too and overcoming drugs and alcohol. Her certain knowledge of the need to stay clean everyday. Brynna has difficulties with her need for alcohol. Brynna is aware of the need to rebuild her self. She has the need to block out the past. She tries to get herself together. Then there is her parent whom she labels as a functioning alcoholic. This reflects real life. Many teenage alcoholics has an alcoholic relative. Often that relative is a parent. There is the constant temptation for booze and/or drugs for life. Brynna's parents are supportive and do what they think is best.