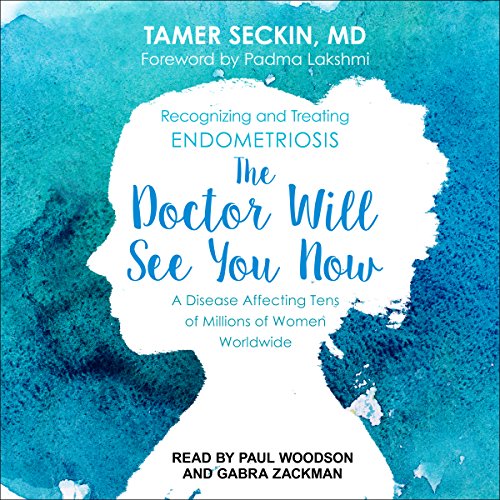 Endometriosis materializes when the endometrium - the tissue that lines the inside of the uterus - sheds, but does not exit a woman's body during her period. Instead, it grows outside of the uterus, spreading to organs and nerves in and around the pelvic region. The resulting pain is so physically and emotionally insufferable that it can mercilessly dominate a woman's life. The average woman with endometriosis is 27 years old before she is diagnosed. It is one of the top three causes of female infertility. The pain it emits can affect a woman's career, social life, relationships, sexual activity, sleep, and diet. It is incurable, but highly treatable. Unfortunately, though, it is rarely treated in a timely manner, if at all, because of misdiagnoses and/or a lack of education among those in the medical community.

This book gives hope to everyone connected to endometriosis. That includes every woman and young girl who has it, and the women and men in their lives who know something is wrong, but do not know what it is or what to do about it. This book is written at a level that everyone with ties to this disease can relate to and understand, but it is also for doctors with good intentions who lack the knowledge of how to diagnose or treat it.

"This comprehensive text, as the author hopes, is likely to raise awareness among other physicians and among general readers, particularly women who will now have the knowledge necessary to become powerful self-advocates." ( Publishers Weekly)

What listeners say about The Doctor Will See You Now

This book is CHANGING MY F*ING LIFE

Holy f*ing sh**, this f*ing book is f*ing REVOLUTIONIZING how I see this disease! :-O I have an insufficient quantity of expletives to describe my *PROFOUND* learning and amazement while listening to this book. And just to make that *more powerful* for those reading this review, here's some background on my already fairly extensive research of this condition... I was tentatively diagnosed with endometriosis at the age of 17 (I'm 39 now, so that was 22 years ago), after I collapsed/passed out from an ibuprofen overdose in my cheerleading class while we were doing aerobics. I was formally diagnosed by laparoscopy, and had a cauterization procedure (which I realized very quickly thereafter did almost nothing for me) done at the age of 20. I studied anatomy, physiology, and kinesiology extensively throughout highschool, massage school, and college, almost pursuing a higher education in medicine, but deciding to follow my passion for dance instead, then returning to school for a psychology degree in my late 20s. For the final paper of a class during my psychology degree, I wrote a heavily researched paper on this condition, and how to treat its extensively life-affecting symptoms, largely with dietary and lifestyle support. That research (which was performed in 2010) was what lead me to my first encounter with the mechanism of excision surgery, and a doctor in Oregon who was having fairly revolutionary success with Endo patients at the time, but which was only *just starting* to be widely known in the gynecological community 10 years ago. I have been studying and researching this condition and female reproductive health for the better part of 20 years, both formally (in college pre-med courses), and informally (in independent reading and acquisition of knowledge, motivated by my *extreme* cyclic pain). I have more knowledge than the average lay-person, and even the average Endo sufferer, and I *STILL* stopped the playback *Multiple Times* just to shout the words "Holy Sh*t!" or "Of my f*ing gods!" (sometimes many times in a row) when some symptom I've been suffering for decades, and which I *never knew* was tied to this condition, would surface in the reading. I cannot recommend this book enough, for literally anyone who either has, or know someone who has, *A Uterus!* I'm not even going to limit this to people who have painful periods, because some of the things he shares are things I *never expected* to be related to Endo, like fatigue! :-O And I think the way he presents women's health is something everyone should hear. Anyway, read it, listen to it (anything narrated by Paul Woodson is *absolutely* worth listening to, anyway, and Gabra Zachman's section wasn't nearly long enough, because she's also stellar), but get this information into your brain and the brains of those around you. It may help a woman or family in *critical* need if this knowledge can be disseminated as widely as humanly possible. And everything he says about "women's problems" being taboo and not talked about is *painfully, horribly* true, and is THE MAIN CAUSE OF WOMEN NOT GETTING THE HELP THEY NEED! Along with *everyone,* EVEN MEDICAL DAMN PROFESSIONALS, just writing off mensural pain as "just part of being a woman." The terrifying quantity of times he mentioned this phenomenon in the book just makes me want to scream. If men had issues with their penises being in *even a small* quantity of pain once a month (if monthly reproductive cycles were accepted as "normal" for a man, that is), you'd better f*ing believe that the research on this sh** would have been blazing trails in medicine *decades* ago. It just f*ing *INFURIATES* me. >:-( Anyway, this man, at least, is pioneering the conversation, and the help that women need. I am incredibly grateful I found this book.

This information is VITAL to women suffering. SHARE THE KNOWLEDGE AND GET THE WORD OUT! Thank you so much for writing this book! I plan to book an appointment very soon with you.

I LEARNED SO MUCH!

Finally! Someone who knows about Endometriosis!! This book was life changing and I felt comforted knowing that I am not alone. Dr.Seckin is the doctor you wish you had. I’m going to gift all of my past doctors this book. May they learn and grow from it. Every Endometriosis patient and their loved ones needs to read this.

I learned so much from this book. I have Endometriosis and I feel like reading this book helped me know how to talk to my doctors about it and get the best treatment that I can get. Without reading this I probably would have gone with the first doctor that I talked with, who wanted to burn off the Endometriosis. I now know that is the worst thing you can do. I'm so glad I listened to this book. #lifechanging #tagsgiving #sweepstakes

Absolutely love this book! So informative and well written. 100% recommend this book! I just recently started suffering from endometriosis And someone recommended this book to me, so happy I read it. It has brought me comfort and so much more understanding of this disease.

I had been told I had endometriosis based on symptoms only so I started researching more about it and came across this book. I learned alot just listening to it. Great read.

Whilst I would recommend this book to others with endometriosis, and those who should learn about it- I can't say I enjoyed it. There were many desperately affirming parts, and much that I liked. But ultimately, it felt like a sales pitch for Dr Seckin's work. I now feel I know the gold standard, and I know that it's out my reach and the reach of thousands of us across the world, so feel I will never get good treatment. It's short, so worth listening if you get credits, but I think it's only seen as outstanding because there is such little accessible information available on this topic.

Everyone needs to read this book especially those suffering and treating endometriosis. Highly recommended

This was very eye opening and shower me I wasn’t crazy with how I felt. This book prepared me for visiting the doctor

great book for understand the condition and treatment options. great to arm you to explain to others and share for yourself with doctors

I don’t wish to wonder what could of happened it I had never of listened to this audiobook. Thank you Dr. Seckin

This book was amazing. Not only was it very informative, but it helped me reflect and understand I am not alone.