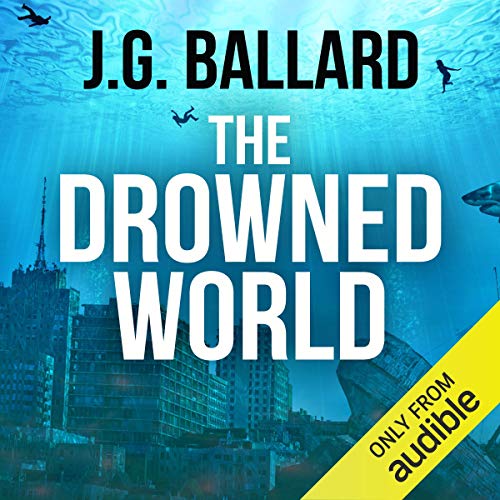 When London is lost beneath the rising tides, unconscious desires rush to the surface in this apocalyptic tale from the author of Crash and Cocaine Nights.

Fluctuations in solar radiation have melted the ice caps, sending the planet into a new Triassic Age of unendurable heat. London is a swamp; lush tropical vegetation grows up the walls of the Ritz and primeval reptiles are sighted, swimming through the newly formed lagoons. Some flee the capital; others remain to pursue reckless schemes, in the name of science and profit.

While others drain the submerged streets in search of treasure, Dr Robert Kerans - part of a group of intrepid scientists - comes to accept this submarine city and finds himself strangely resistant to the idea of saving it.

First published in 1962, Ballard’s mesmerising and ferociously imaginative novel gained him widespread critical acclaim and established his reputation as one of Britain’s finest writers of science fiction.

J. G. Ballard was born in 1930 in Shanghai, where his father was a businessman. After internment in a civilian prison camp, he and his family returned to England in 1946. He published his first novel, The Drowned World, in 1961. His 1984 best seller Empire of the Sun won the Guardian Fiction Prize and the James Tait Black Memorial Prize, and was shortlisted for the Booker Prize. It was later filmed by Steven Spielberg. His memoir Miracles of Life was published in 2008. J.G. Ballard died in 2009.

“Extraordinarily prescient… Ballard is a prophet” (Philip Pullman, Guardian)
“One of the brightest stars in post-war fiction. This tale of strange and terrible adventure in a world of steaming jungles has an oppressive power reminiscent of Conrad” (Kingsley Amis)
“Powerful and beautifully clear… Ballard’s potent symbols of beauty and dismay inundate the reader’s mind” (Brian Aldiss)

In dreams we meet again

'The Drowned World' was the first JG Ballard book I ever read, and I consider it the most fascinating, and engaging, of the initial quartet concerned with climatic catastrophes ('The Wind from Nowhere'; 'The Drowned World'; 'The Crystal World'; 'The Burning World/The Drought'). Ballard regarded it as his 'first' novel (rather cruelly condemning 'The Wind from Nowhere', which isn't really so bad).

Given that 'The Drowned World' is Ballard's 'first', or at least very early, work, it's supremely confident, yet economical, writing. The style seems more concise, and the plot more precise, than the other works in the quartet. At the same time, the subtext/s are packed in tightly: a lot of commentators will point to the Freudian and Jungian undertones, the apparent parallels with Conrad's 'Heart of Darkness' (explicitly denied by Ballard), Ballard's incorporation of Surrealist techniques and themes (perhaps novel here, but not a surprise to anyone familiar with his later works - the resonances between this and 'The Atrocity Exhibition' are fascinating in retrospect), and allusions to Shakespeare and classical mythology. I have no doubt that 'The Drowned World' can be analysed on these (and probably other) levels if you wish. Much of of the delight of the book is in Ballard's lavish descriptions of the bizarre externalities and it is easy for a reader to 'lose themselves' in the evocative landscapes. However, for me, 'The Drowned World' (much like 'The Crystal World') is all about psychology, not geography. What Ballard is really inviting you to consider is not the unusual world he describes, but how people react to, and behave in, such extremes.

Many readers feel that Ballard's characters (especially the lone female character of Beatrice in 'The Drowned World') are not sufficiently well-drawn to connect with, and it is therefore impossible to be interested in their their motivations and their decisions. I doubt this is an oversight, rather a very deliberate technique: he's not inviting you to empathise, rather to analyse. Ballard acknowledges explicitly that even the characters rarely connect with one another, that "their only true meeting ground would be in their dreams".

Julian Elfer's narration of this text is very good - a couple of odd pronunciations here and there, but the pace and tone is excellent.

As Ballard never disowned 'The Drowned World', I suggest it's a good starting point for anyone wanting to 'try' Ballard. My only negative comment would be that, in audiobook form, I found the last third or so of the book more chaotic than I remembered from my last reading (in written form). For me, Ballard excelled in the short-story/novella format - his books, such as this one, can feel like they pack too much in and/or 'run out of steam' before the finish ... but as notions of time always play such an important element in his writing, I'm comfortable admitting that perhaps this is a reader failing, not a writer fault.

The Drowned World was Ballard's first novel, and with its imaginative evocation of a submerged London, where iguanas prowl and prominent landmarks slowly sink into the sludge, it shows a huge amount of promise. Particularly fascinating is Ballard's portrayal of the devolution of the human psyche, as it turns towards a primitive state of being, which, Ballard argues, lies dormant in all of us, until triggered. It is clear that this is a writer not quite fully developed, however, as characters are poorly drawn, in particular the sole female character. Dialogue feels quite dated, and there are some questionable portrayals of black characters. I decided to start with this novel before delving into his others, and whilst it is not an entire success, his dystopian world has sufficiently sparked my imagination to make me want to read more. Skip the first chapter though - it is an introduction which is better kept to the end.

What could easily ruin this book for you is the introduction. It’s written by Martin Amis, who I normally have some time for, but here he gives away so much of the book before you even start to read it. The publishers really should stick this kind of thing at the end.

That aside, three stars is a bit harsh in many ways because this is a good book that's well narrated and when I first read it many years ago the concept was new (at least to me) so it seemed imaginative. However, Ballard has written so many great books that outshine this, the three stars reflect more it's place in his canon than it's quality next to other writers work.

Having said that, it's basic premise (not the flooding) was, for me, total pants and I saw it as capturing the strange state of mind of one individual rather than telling a particularly involving story. Interesting but not great. I felt let down this time round.

Decent enough narration but when the author has written that a character is speaking quietly it isn't necessary to start whispering their words; couldn't hear any of that dialogue

Julian Elder, you through me out of this story several times with your mispronunciation: 'coup de gras', 'trypych' to name only two. Disappointing.