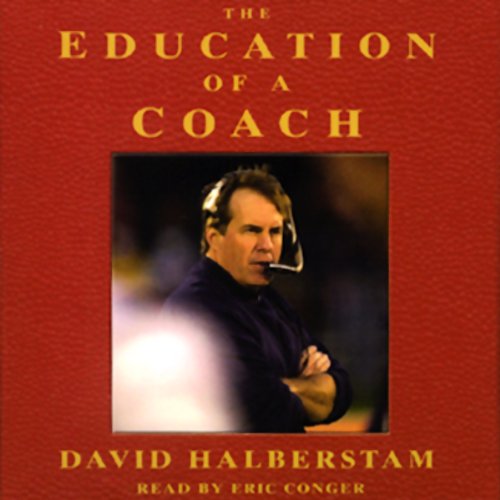 The Education of a Coach

Bill Belichick is one of the most intriguing yet enigmatic figures in contemporary American sports. He is the best professional football coach of our era, and his New England Patriot teams are the winners of three of the last four Super Bowls, including one of the most stunning upsets in that championship series. Yet until now, Belichick has deliberately stayed as far from the spotlight as possible, proving himself as elusive as he is talented.

Distinguished writer-historian David Halberstam paints a dazzling portrait of a man and his profession, revealing both the intimate world of Bill Belichick and the unique abilities that make him so successful: his exceptional intelligence, his ability to break down and exploit game film, his singular discipline, and his almost unmatched work ethic. Working with an unusual degree of cooperation from Belichick, Halberstam shows us a man who has somehow managed to change his players' view of how the game should be played. The result is an audiobook not just about Bill Belichick, but about what it means to be a leader.

Halberstam begins with the story of Bill Belichick's childhood and the enormous and lasting influence of his late father, Navy coach Steve Belichick. Considered the best scout of his era, Steve taught his son to break down game film at the age of nine. What we come to witness are dual journeys, the first of the immigrant Belichick family moving from the harsh, unsparing world of the steel mills of Ohio into the mainstream of American life, and the second of Bill Belichick's systematic climb to the top of his profession, in no small part because of a family work ethic forged in those same steel mills.

By exploring how Belichick arrived where he is, Halberstam reveals the strategies and ideals that have helped Belichick create his winning legacy and set a new standard for what a coach should be.

What listeners say about The Education of a Coach

I thought this was provided a good overview into Belichick's rise as a coach, but it lacked in depth. I wanted to know more about his character and methods.

IT STARTED WITH FACING THE PETER PRINCIPLE!

This book explains how Military dad and son William never did what kills so many dreams: both excelled and were quite content w the jobs they had, dad at Navy, Bill at the old Baltimore Colts.
Far exceeded my expectations: factual without being "psychological". Strategic, strong, patient, prudent, practical, just, loyal - all these quiet elements of the education of the coach who trains on my NEW [JERSEY] Jets año y año etc! /schneider/

The Brilliance of Belichik and Brady is based an an egoless approach to excellence! This book explains how they got there.

Halberstam succinctly yet thoroughly captures the essence of Bill Belichick-the BillyGOAT-the greatest of all time. The author wisely avoids overdrawn backstory, keeping it moving like a well-executed drive with the clock winding down. A must-read for any fan who came of age during the Patriot dynasty of the early 2000's.