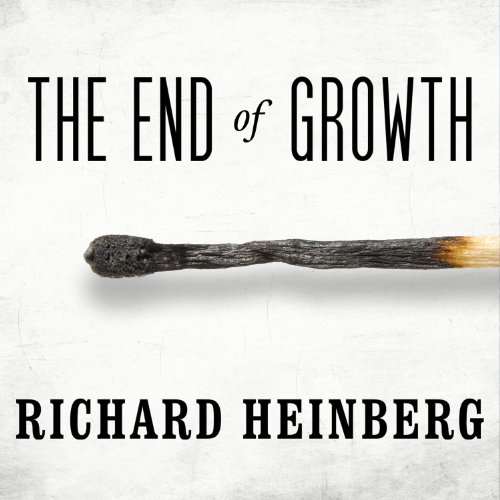 Economists insist that recovery is at hand, yet unemployment remains high, real estate values continue to sink, and governments stagger under record deficits. The End of Growth proposes a startling diagnosis: humanity has reached a fundamental turning point in its economic history. The expansionary trajectory of industrial civilization is colliding with non-negotiable natural limits.

Richard Heinberg’s latest landmark work goes to the heart of the ongoing financial crisis, explaining how and why it occurred, and what we must do to avert the worst potential outcomes. Written in an engaging, highly readable style, it shows why growth is being blocked by three factors:

What listeners say about The End of Growth

Economics for real people in our turbulent times. Scary, but rings true, the book describes how our unsustainable use of natural resources is setting us up for some very difficult times.
Heinberg does include some interesting alternative options that are currently being tried in different parts of the world. We certainly do need to change our paradigm to one that better harnesses our human strengths and weaknesses.
Informative and well written.

What did you love best about The End of Growth?

It asks challenging and thought provoking questions that deal with the very future of mankind. It delivers an historical context that suggests that there is another way for humans to gladly live beside one another

Would you listen to The End of Growth again? Why?

Absolutely. Very relevant to anyone trying to garner how the future may play out. Suggest readers also read ABUNDANCE - The Future is Better than you Think, as it offers a more positive aspect to this story.

Starts from a good point, but stretches.

The author starts with some very valid points, but selectivity over simplifies and complicates issues to paint a single path. His observations should reinforce the unpredictable nature of the situation. In the end it is all to push a radical idea rather than foster understanding and discussion.

A bit of a con job

I don’t’ typically write reviews, but I needed to get the strong feelings this book generated off my chest – not to mention my wasted money. I spend much time trying to educate myself on issues of the day. I do it to protect my investments that support my family and me. Given same, I thought it important to read this book given that the author believes that we will be facing some serious changes in the future. I was interested to know why he thought that and what his reasoning was.
I thought the first part of the book was interesting and in fairness, there were some good facts early on.
However, it quickly becomes obvious that this book is strictly written to sell the hyper-liberal position on Global warming, anti-corporatism, profit hate, etc.
This writer, comes very close to endorsing the writings of Karl Marx and goes on to basically say we all need to do is stop having kids, stop driving cars, stop flying in planes, forget about TV’s, iPods, iPads, make real good friends with our immediate neighbors and grow vegetable gardens – basically go back to the pre-industrial age. He recommends we check out communes with 50 people trying to make a go of it out in nature – that sounds great! He loves unlimited money printing and loves all kinds of different paper and fiat money. Not real money, not money that has intrinsic value, but lots and lots of depreciating money and lots of political promises.
Mr. Author, you must somehow be related to Paul Krugman? If not, you two must meet – it would be love at first sight.
Once we all go back to the Stone Age and fight his revolution and make all the bad people go away, I guess since he’s so smart and wrote a book, that he’d tell us he’s going to be in charge, sort of like Lenin in 1917. Sorry, we know how that turns out. Not buying what this guy is selling – a con.

Not one of Audible's best

What would have made The End of Growth better?

The performance is terrible. I ended up listening to it at 2x speed.

Would you be willing to try another book from Richard Heinberg? Why or why not?

Probably, but not without listening to the sample

A dead ferret could have done better.

R Heinberg is so full of it. I don't know why I bought his book. Sure he makes a valid point here or there but overall he's just a doomer windbag.

THE SKY IS FALLING

Both "The End of Growth" and "How an Economy Grows" are popular audio book versions that remind one of “Chicken Little”, the 1943 animated film. The sky is falling according to the Richard Heinberg and Peter and Andrew Schiff because economists do not know what they are doing when tinkering with economic policy.

As logical thinkers know, saying something does not make it so. Heinberg recounts many environmental facts about today but stands on infirm ground when predicting the future. This is not to say that calamities will not continue to occur—natural disasters, man-made disasters, famine, natural resource depletion, pollution, et al will continue to plague society.

Freedom of choice is the source of humankind’s magic. Freedom is desired by all people of the world even though many fear it. (Freedom is feared because of its inherent quality of personal responsibility.) As freedom grows, which is genetically ingrained in humankind, science and technology will expand. History suggests science will come to civilizations’ rescue.

What did you like most about The End of Growth?

Heinberg's systematic approach to deconstructing the current world economy into understandable concepts and then linking the components into values that respond to energy use, proving why the status quo is unsustainable, and simply cannot, CANNOT - due to the laws of physics, continue on the trajectory it has been following. He also explains why attempts to restart the economies of Europe and America are proving so difficult, and what the future holds for the tiger economies of China and India. Not only does he show how the system simply HAS to crash, but he devotes two chapters at the end of the book to visioning a new possible world economy.

What was one of the most memorable moments of The End of Growth?

For me, the way in which Heinberg made the compelling connection between energy use and money was a real 'aha' moment for me. When one looks at the relationship between energy, particularly cheap energy, and what it gave us as a species, and then understand what the end of access to that cheap energy means, the pieces all start to make sense.

Who might you have cast as narrator instead of Paul Boehmer?

Realizing that my pension is probably going to be worthless when I really want to start using it came as a bit of a blow. I am now lying awake at night wondering how best to adapt to that scenario. Buy gold? Buy a farm? Stock up on tins of tuna and move to the mountains?

A fantastic book. I would love to have more of Heinberg's work available in audio format.

A must read for anyone who deems to be intelligent

A well argued book that states the obvious if we would only but look. We live on a finite little pale blue dot that cannot sustain the economic madness of continued growth. The author is painstaking in his detail and no one who reads this book if you dare will fail to be influenced by it.

Excellent, I would reccomend to anyone , I've listened twice now.
Not sure about the narrator but it's not a big issue.