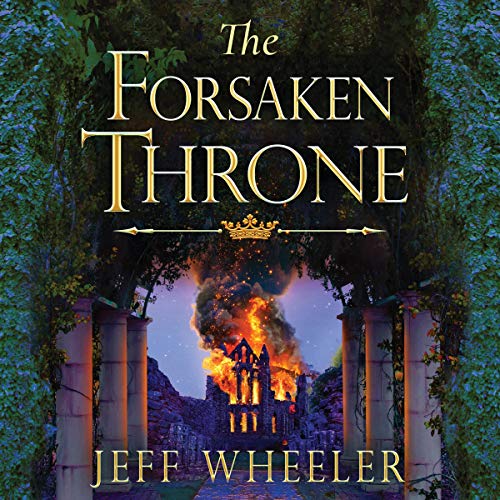 In the thrilling conclusion to the Wall Street Journal bestselling Kingfountain Series, a conflicted champion must navigate a treacherous world to secure the peace.

A devastating disaster has left the Forbidden Court in ashes, its fountains destroyed, and its magic at risk. It was destined as the site of Trynne Kiskaddon's coronation as empress. Now, all Trynne can imagine is the roar of flames, the cries of Gahalatine's people, and the smell of cinders in a city gone dark. Tragic as the threat to Kingfountain is, it's nowhere near as foul as the treachery posed by Morwenna. Saboteur, conspirator, and full-blood sister of the king, she is prepared to set forth a wave of destruction that will eliminate everything that stands between her and possession of the throne.

But Trynne has her weapons, too - her magic, her resilience, her skills at intrigue, and especially, Fallon. The man who once swore his allegiance to Morwenna now stands by Trynne's side as they venture into the unknown to protect those they love, reunite with a family scattered by diabolical forces, and safeguard a kingdom...as well as the destiny the Fountain has for each of them.

What listeners say about The Forsaken Throne

each book in the series completely flows into each other effortlessly... highly recommend... very thankful there was an ending for all characters

Throughout The Silent Shield and The Forsaken Throne, I wasn't sure how Trynne Kiskaddon was going to find a husband to marry. The twists and twines of the Author's pen was so deceiving keeping me reading the story till the end.

I was really involved with all the characters and really don't want to see this as the end, but hopefully, the Author will continue the story line.

I liked how the Author joined the two series together.

I have no idea what I am going to do now with my time. I hope Jeff Wheeler is working on a new book after The Poisoner's Enemy.

So I enjoyed this book, and this saga.
It was well worth listening to.

Rudd’s performance was great as usual.

Wheeler did a wonderful job with this saga of magic and intrigue.

I have thoroughly enjoyed this series. I always enjoy listening when the narrator changes the voice to show who is speaking. I some places the reader sounded stiff but overall a grand book

sorry to have this series completed. will be checking out other books by J. Wheeler

Loved the story. Lots of unexpected twists. Kate Rudd does a spectacular job with enhancing each character by the way she uses her voice through change in timbre as well as the use of regional accents. This is a must read/listen!

Start at the start! 💜 inquisitive, inspiring, pertanent, thrilling, heartwarming, and adventurous! Story telling at its finest.

I’m not very good at expressing myself in print but this series evokes all emotion. Great story line and addictive. I’m hooked and hope there is more to the series. Initially I started the series thinking it was a side story to the Harbinger series. Both were awesome.

He saved the best for last!

I loved the entire series, but the last one was my favorite. What a beautiful story!

Man, this is a great series. And this was an amazing way to end it. I hated to see it end, but the tale was wrapped up in such a perfect way. I thoroughly enjoyed the entire series, and this final installment was no different.

This has to have been one of the saddest series I have listened to. If I'm honest, it has been more bitter than sweet.

If someone asked me after listening to this what it meant to be fountain blessed, I would have to say it would be more fountain cursed. However, it has been a truly brilliant listen and these last two books really increased the pace. Marwenna is at her most evil; Trynne her most brave; Fallon's sacrifice for true love. I am disappointed that Owen, who was my favourite character, seemed to have been nudged out in the last book and just disappeared.

an excellent end for the trilogy

part 3 of the Joan of Arc in the time of King Arthur is a nice ending to the story.

A wonderful ending to a saga crossing time and world's, full of twist, turns, tension and some tearful emotional moments. I will miss the characters and Kate Rudd's voices which are the final artful layer of magic bring this epic saga to a grand conclusion? Wheeler weaves a spell using familiar place names giving them new purpose, new geography and so many familiar elements of every day life and turning them into spell binding tales of joy, loss, sorrow, redemption. so many ordinary things are re rendered extraordinary.

very good enjoyed it very much 5 stars. Very nice story with lots of action and adventure..

Thoroughly enjoyed listening to this audio book. I love listening to Kate Rudd's voice she really brings the story to life. I even cried at the end. I have loved the whole king fountain series, Jeff Wheeler is a wonderful writer.

I enjoyed the complete series and would recommend this series to others..
good narration throughout.