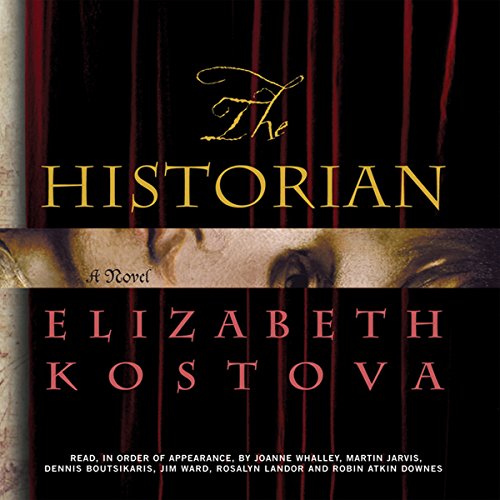 To you, perceptive reader, I bequeath my history....Late one night, exploring her father's library, a young woman finds an ancient book and a cache of yellowing letters. The letters are all addressed to "My dear and unfortunate successor," and they plunge her into a world she never dreamed of-a labyrinth where the secrets of her father's past and her mother's mysterious fate connect to an inconceivable evil hidden in the depths of history. The letters provide links to one of the darkest powers that humanity has ever known-and to a centuries-long quest to find the source of that darkness and wipe it out.
©2009 Elizabeth Kostova (P)2009 Hachette

"Quite extraordinary....Kostova is a natural storyteller....She has refashioned the vampire myth into a compelling contemporary novel, a late-night page-turner." ( San Francisco Chronicle)
"Kostova's vampire is no campy Lugosi knockoff....Blending history and myth, Kostova has fashioned a version so fresh that when a stake is finally driven through a heart, it inspires the tragic shock of something happening for the very first time." ( Newsweek)
"Impossible to resist." ( Miami Herald)

This is an abridged version

Rather unethical of Audible to offer this abridged version without stating it upfront. The full book has richer detail, and this audiobook tries too much to be a movie or drama, rather than an audiobook.

I loved this book when I read it a few years ago, and I was a little aprehensive about the abridged version, given that the full story is so wonderful and dense. This audio version is well worth the download.. It flowed seamlessly and I did not once get the sensation that I was listening to only half the story. One of the authors has a bit of a funny tone to his voice, but the primary narrator is engaging and easy to listen to.

I would recommend this to anyone who enjoys -real- vampire stories, where the creatures are terrifying and intelligent (unlike more contemporary interpretations of Vampires being pretty, shiny, go to high school and are no more frightening than a pair of bunny slippers). Vampire stories that cause your gut to clench in fright.

For those who like their stories with a little history thrown in, Kostova has brought the legend of Vlad Tepes (AKA Vlad Dracul or Dracula) into a relatively modern setting, with the story's protagonists being hunted by Vlad Tepes' sinister inhuman agents as they move throughout Europe in their hunt to find, and destroy Tepes once and for all.

Don't get the abridged

Great story but it was incomplete. I thought i had not download the whole book when it ended.
But i don't want to spend a credit buying the book again. I am out of this line of books unfortunately.

A fine work of fiction. That the story is read by each caracter workshop surprisingly well. The disappointing factor is that it is abridged, and that distupts the flow of this allready intricate tale.

Where does The Historian rank among all the audiobooks you’ve listened to so far?

The father I guess, he's the protagonist.

The unabridged version would probably be worth the extra money. I purchased this one because it was only 10 hours long, and I had a 10 hour car trip, and I wanted something digestible. However, the characters are not very well developed, the plot is jumpy, and the language is rushed in this abridged version. Even the sample sounds better in the unabridged.

What made the experience of listening to The Historian the most enjoyable?

The use of different voices for the reading of different letters. Each character is voiced by a separate actor or actress performing with a different accent. As I am a fan of all accents, it made the story very pleasant to listen to.

What was one of the most memorable moments of The Historian?

Rossi's missing letters meant to be sent from Romania. They reveal SO much about the historical Dracula as well as the story's plot.

As mentioned before, the accents. The best was the guy who did the man with a mixed Scottish/Romanian accent. It was superb and an excellent example of hard work and top-notch voice acting.

Who was the most memorable character of The Historian and why?

Perhaps Rossi himself but each plot line has its own quirks. The unnamed narrator's recounting of her trip to Italy and Slovenia has its own charms too.

I've listened to this recording many times. It is fitting when the Autumn chill fills the air and you want something intellectually satisfying yet a bit dark.

Kept me on the edge of my chair

Going into this book, which was suggested by my mom-in-law, I was a tad hesitant because I am not a person who watches scary movies let along hear them. I can say that I was happy that I took a chance and listend. All the way through I was held in suspense for the next thing to possible pop out from the darkness.

this is a fantastically Rich story, made even richer by the storytelling. it brings the story to life in a very eerie but intriguing way. I highly recommend this audible book!

I read this book when it came out, I was much younger and enjoyed very much. And always tough about it as a light autumn reading. However this audiobook ruined for me. The horrible sound effects.

Had a few interesting twists and I did not expect it to be about Count Dracula, so it was different for a change

the story told from the different parties

The father (Paul) was totally not a good fit to be the narrator. It was obvious that he was reading, so difficult to lose yourself in the story, and he was far too effeminate to be her father....I just couldn't reconcile the narration with his role. Liked all the other narrators though!

Could you see The Historian being made into a movie or a TV series? Who should the stars be?

No - it was too drawn out in parts

The story is great but this recording is either missing sections or it is incredibly badly abridged.

I did enjoy listening to the book. The story is good, however I admit if I were to read it myself, I would give up rather early on. The narration is superb. I do prefer my vampires to be bad, so if you are after something with Dracula, this might be the thing for you.

It took me half a chapter to realise I had already red this. Even still I could not remember most of it, all I knew is that I found it a little cliché last time. As you can imagen it was even more so the second time around.

very good story and excellent management of several narrative perspectives. love the details in the description of medieval cities and items

A unique take on the Dracula legend.

Kostova has quite an original take here on what is over-saturated subject matter. She blends her narrative nicely between reality and fiction with a good amount of 'page turnabilty' so to speak. i felt she missed a few golden opportunities to delve into the fictional Dracula and his purpose though. Overall the voice actors were OK, though the main male lead was a bit drab.

This version is all over the place 🤯

This version is in parts (apparently to make downloading quicker) but they do not run in the same order as the book - makes for a confusing and hotch-potch experience. Very disappointing considering it would be a 5-star book if it was in the correct order.