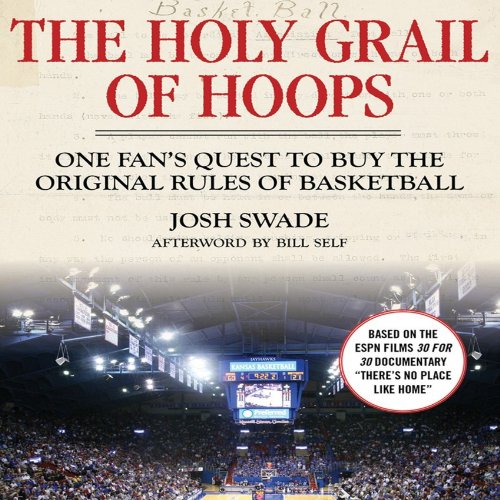 Aaron Landon will delight listeners with his nebbish-y and intimate performance of Josh Swade’s sports memoir, The Holy Grail of Hoops: One Fan's Quest to Buy the Original Rules of Basketball.

Swade is a basketball fan and a devotee of one team: the University of Kansas’ Jayhawks. When he learns that the original rules of basketball, as written by James Naismith, are up for auction, Swade goes on a quest to raise the $1 million to buy the document to return to Kansas, where Naismith coached.

When Josh Swade found out that the original 13 rules of basketball, penned by Dr. James Naismith - the father of modern basketball - were up for auction, he knew that it was his duty as a lifelong Jayhawks fan to make sure that they ended up where they belonged. Penned in 1891, Naismith's original rules were auctioned off by Sotheby's in New York City on December 10, 2010. Upon hearing the news that Naismith's grandson, Ian Naismith, had offered the rules for auction, Swade could not accept the notion that this sacred document could reside with just some stranger or in a random home or hall. He resolved to ensure that Naismith's rules be returned to his spiritual home of forty years, The University of Kansas. Swade had his raison d'etre. He had all the determination one could need. There was only one issue. He did not have 4.3 million dollars.

Spanning the course of 39 frantic days, Josh Swade embarked on a fanatical journey that would take him across the country. His nearly religious obsession brought him face-to-face with NBA players Paul Pierce and Steve Nash, NBA greats Jerry West and Larry Brown, and many others who knew the importance of this relic. With multiple hurdles ahead of him, will Josh be able to find the money and support to purchase the rules before it's too late?

What listeners say about The Holy Grail of Hoops

From Jewish holidays to basketball players names to even teams' records it was evident he knew little about hoops.
Wow