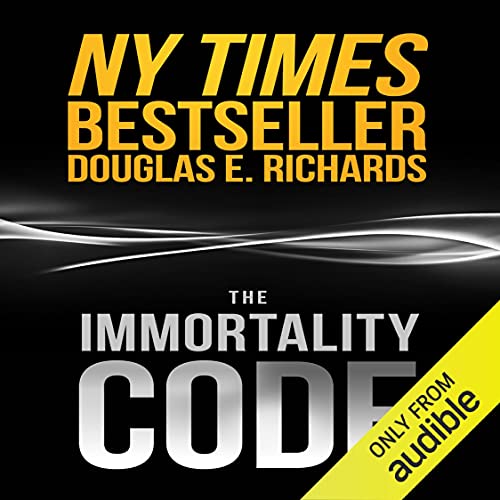 Allie Keane's breakthrough in quantum computing holds the key to unlocking eternity. But can she survive long enough to use it? A riveting science-fiction thriller from the million-copy NY Times best-selling author.

"Richards is a worthy successor to Michael Crichton." (SFBook.com)

When Allie Keane makes a revolutionary discovery in quantum computing, she kicks the ultimate hornets' nest. She doesn't know it, but a hidden battle for tech supremacy is raging around the world, and whoever controls her discovery will dominate the globe. Soon, Allie is being hunted by ruthless forces desperate to learn her secret, and only Zachary Reed, a gifted operative within a shadowy government agency, stands in their way.

But as extraordinary as Allie's breakthrough is, it holds the key to unleashing something far bigger. An unrelated technology thousands of years beyond current science. A staggering advance capable of bringing about a utopia, rewriting the laws of life and death, and helping humanity spread throughout the stars.

As long as it doesn't wipe out all life on Earth before that can happen....

The Immortality Code is a masterful thriller. One crammed with breakneck action, unexpected twists, mind-blowing science, and ethical dilemmas listeners will be contemplating long after they've heard the last word.

"Richards is an extraordinary writer", (Dean Koontz) who can "keep you turning the pages all night long". (Douglas Preston)

What listeners say about The Immortality Code

I loved this novel like all of the others by Richards. This one in particular tickled me because I was sure of the plot from the very beginning only to be blindsided at several turns. The title is very appropriate, and while some of the dialog is a bit cringy at times, I feel it captures the subtle charm of what it is to be human. I can't wait to see what is next

The ideas put forth in the story are fascinating. But the dialogue is cringe-worthy. The author writes the interaction amongst the characters as though he’s never had a real conversation. The depiction of the female lead in particular borders on insulting.

95% exposition and very little plot or character development. Don't let this be your first book by Douglas E. Richards. He is usually quite good.

I love this author!

As always, a fantastic story with mind blowing leaps of thought, an incredible twist and fascinating science.
Characters are likeable/hateable: perfect.
Just gotta get used to a guy reading the female lines on Audible lol.