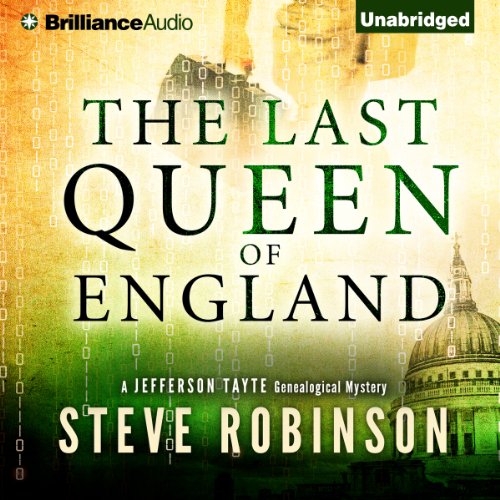 The Last Queen of England

While on a visit to London, American genealogist Jefferson Tayte’s old friend and colleague dies in his arms. Before long, Tayte and a truth-seeking historian, Professor Jean Summer, find themselves following a corpse-ridden trail that takes them to the Royal Society of London, circa 1708.

What to make of the story of five men of science, colleagues of Isaac Newton and Christopher Wren, who were mysteriously hanged for high treason?

As they edge closer to the truth, Tayte and the professor find that death is once again in season. A new killer, bent on restoring what he sees as the true, royal bloodline, is on the loose…as is a Machiavellian heir-hunter who senses that the latest round of murder, kidnapping, and scandal represents an unmissable business opportunity.

The Last Queen of England is a racing thriller with a heart-stopping conclusion. It follows on from In the Blood and To the Grave but can be enjoyed as a stand-alone novel.

Would you listen to The Last Queen of England again? Why?

Yes. To make certain I didn't miss anything and to enjoy the story again.

Yes. I couldn't wait for the story to progress.

Superb performance. Nailed the emotions of the characters.

Turn off the television and enjoy Simon Vance's narration of this engaging book.

Love a mystery where you can learn something new in the process.

The intrigue of a 300 year old Jacobin "plot" involves learning the ins and outs of the practice of Genelogy as well as a lessor known (for me anyway) piece of history - the reigns of Queen Anne and Queen Mary of Britain.

Good story that keeps you guessing right up to the end.

I love the genealogical aspects of this book. The the first in the series, it is what maintained my interest enough to finish the book. Unlink the first book ( To The Grave) however, there is no second story to keep the reader interested.

The main character (Jefferson Tayte, an American genealogist) is flat and typecast. The assassin appears very early on and the reason for a string of assassinations is over the top. It might have been more interesting if there was more variety in the way people died. Like To the Grave it is all guns, guns, guns. The problem started for me when the bodies started mounting all over London.

The lackluster response of law enforcement was unrealistic in this day of terrorist threats and realities. British Intelligence does get involved in the case but are clueless. Why don't they take Tayte off the street after the two agents escorting him are shot? They let him wander and reveal case details to the public.

The problems from the first book show up again here. Tayte repeatedly mentions he is searching for his birth parents and that he has a weight problem. But that's all we know. Why is his weight an issue? How heavy is he? Does he have health issues. Or is it just an impression the author has of Americans? Doesn't Tayte have any relatives who know he was adopted? Were his birth parents British? It seems that is why he is so interested in British genealogy. But how does he know this? And Tayte must own stock in a tan suit manufacturing company. He seems to have a never ending stock.

The narrator, Simon Vance, is one of my favorites and he does a good job with Tayte's American English accent and pronunciation. There are instances, however, where Tatye uses a British pronunciation when he just wouldn't have.

twists and turns, a great story, wonderful character development, what more could you ask?! Can't wait for the next one!

Wow. Robinson sure can write intriguing plots with a great cast of characters you can picture in your own mind with his belaboring details.
Now I am hooked 😳

The title of the book was what caught my eye. I got into the book and the story intrigued me. There was no resolution to the mystery. The ending just left me hanging. This book was a waste of a perfectly good Sunday afternoon. The faster I can get this thing off my
Kindle the better.

Fun puzzle but too much action for me

I enjoyed the puzzly romps through London, delving into the history of the Royal Family and Secret Societies; it reminded me of Dan Brown novel.

On the negative side, I find action scenes so boring to read.

Overall, I am in for more of Jefferson Tayte’s adventures, but if the future installments continue to be heavy on action-scenes like this one was I might not last to the end of the series.

Page turner with history, suspense and a bit of...

The history intertwined in this series was interesting and tad over my head, but I didn't let that intimated me from enjoying another Jefferson Tate genealogy adventure. Oh, and abit of... well let's say I don't want to be a spoiler 😉

I really loved this book, JT seems to get into so much trouble when he is doing his job. I like the relationship between he and Jean.

Addicted to this series.

I love that I'm on the edge of my seat over a genealogy mystery! This series has elevated the subject even more so in my personal opinion. Jefferson Tayte is just as powerful a character as Robert Langdon. this author is fabulous!

Where does The Last Queen of England rank among all the audiobooks you’ve listened to so far?

Well I didn't think it possible. But I am pleased to say that Steve Robinson just gets better and better..... Each and every book This being number 3.

There are just so many twists and turns, meaning that you are kept on the edge of your seat if not hanging off of it with every minute!!!!

From the first to the last, each scene getting you deeper and deeper in to the plot and fantastic story.

Hell yes!! it almost cost me my job as you just can't find a suitable place to stop.

This is a action pack adventure that will have you guessing all the way along. It has no real bad language and very little gore. but is a real must for all those thriller fans out there. Well worth a go.

This is the first book I have read not realising that it was no3!! Wish I had started at the beginning. Loved it so nice to read something with people who are not perfect! Great story can't wait for the next.

I've now read all 3 in the series and I've enjoyed them all but I think it helps if you like history as well as a good mystery story.

Too long an action chase, not enough subtlety.

Although the premise was excellent and the genealogical trail really interesting, it seemed like one long action sequence with Tate and Jean being chased in taxis, on foot and on motorbike through the streets of London. Don't get me wrong, it was a good story and I listened to the end, but too much like a common blockbuster movie with chases, guns and murders making the pace rather than the one aspect that sets the series apart from all the others in the same genre - the intelligent, absorbing and fascinating genealogy driving the story forward.

I love this series of books by Steve Robinson, as I have an interest in genealogy it makes it that more exciting for me. The narration by Simon Vance is superb as usual, he is without doubt my favourite narrator.

I am a bit disappointed in this story. I have read the first two books and really enjoyed them but this one had so much rushing about everywhere and gunfights on the streets that I got a bit tired with the violence. Having said that, I thought the reader was very good and I hope the next book in the series will be a bit better.

You have to love history ...

If you love history and mysteries then this is a good series for you
Excellent story lines if a little convoluted. A hero who knows his subject who gets thrown out of his comfort zone and into a thrilling race against time

Enthralled to the end

What an excellent example of a “who dunnit” novel.
The story is set in recent times but includes interesting and factual matter from English past. With a genealogical basis the reader is held captive to the timeless question who, but also why and how, right to the end.
Well worth the read or listen on audible.

Another excellent book by Steve Robinson. Story twists and turns as one clue is discovered that leads to another. This one leaves you on a cliff hanger......Jefferson's family

I loved the plot, the narrator and the atmosphere of the story. A great read for anyone interested in genealogy and the surprises it can turn up.

Whilst the story was not as good as the first two books - it is still a really enjoyable read. I am looking forward to the next installment.