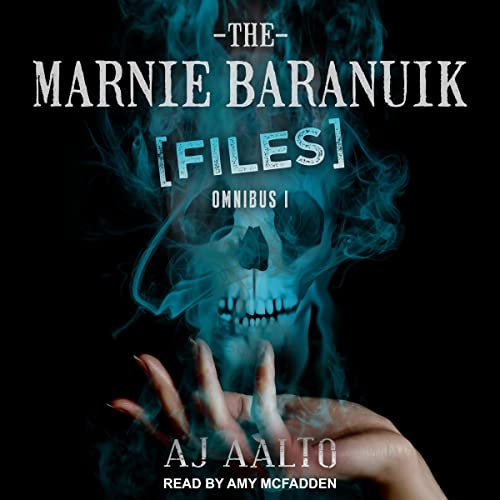 For decades, Marnie Baranuik has been the vigilant but often frustrated daytime guardian for Lord Harry Dreppenstedt, undead aristocrat and all around sass-mouth. As a DaySitter, witch, and psychic detective working closely with the Preternatural Crimes Unit of the FBI, Marnie battles a wild assortment of crimes and monsters, but none so formidable as her own flaws and the poor judgement of her heart.

In this, the first trilogy in the Files, Marnie throws down with dark witches, malevolent psychics, smart-mouthed vampires, accidental ghouls, zombies, a slap-happy poltergeist, and a hot vampire hunter who may drive her wild if he doesn't drive her off the deep end first.

Join Marnie and her resident Cold Companion in the novels Touched, Death Rejoices, and Last Impressions, and let the weird times roll.

What listeners say about The Marnie Baranuik Files

Read & Listened & Love them All!

This is a fantastic series and the narrator nails the characters! I was starting to lose hope in audiobooks and this fully revived me. whenever I'm bored and don't have the time to find another new book series, I look to this one again I just start re-listening to it in the background and remember why it is in my Top 5 favorite books of all time. it's sarcastic, realistic, very much a 'laugh out loud in public '-listen, all the characters tied together very well and the main character is super quirky, The colorful dialog between the main character w/ any of her relationships or adversaries is laugh out loud, worthy and easily envisioned mentally. The narrator really helps bring this together, but the author does a fantastic job pulling all the characters into the plot with just enough background. This is one of those book series that you want spinoffs and to know more about each character's background. I can easily see this being a series. This is a narrator. I do. enjoy and between the book world and her style of narration, this is a perfect movie in my head every time I listen. I really hope that Amy McFadden records the last audiobook. I need more marnie!

It was a great series, with excellent narration, and is so funny. I literally found myself getting the silliest looks as I was laughing out loud with my headphones on like a maniac. I highly recommend it, and I’m going to look into additional books in the series and other titles from A.J. Aalto.

Not sure where to begin here. I did not even finish the first book. I only made it to chapter 25. While the plot of the book was interesting, I just couldn't connect with the main character. I found her very unlikeable. She is abusive, violent, manipulative, and dishonest. Additionally, her constant drooling over the FBI agent that she alternatley hates and want to have sex with quickley became tiresome. She spends way too much time ruminating over things in nauseating detail which quickly got old. I'm a big fan of urban fantasy such as the Dresden Files, Alex Verus series, etc. so I really wanted to like this book. I will add that the narrator did an excellent job.