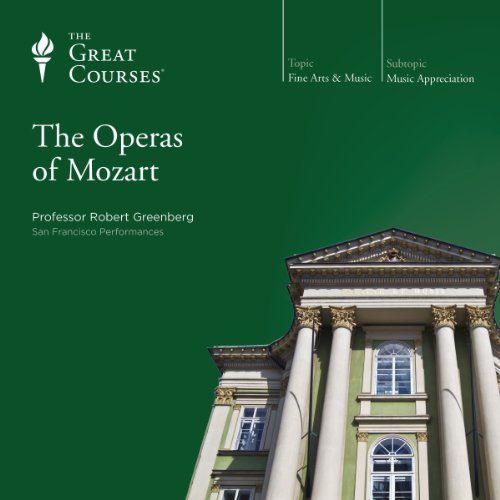 The Operas of Mozart

When Wolfgang Amadeus Mozart died in 1791 at the age of just 35, he nonetheless left behind the defining composition in every available musical genre of his time: symphony, chamber music, masses, and above all - opera. Opera was the prestige genre of the era, and the thought of it, Mozart wrote, made him "beside myself at once." It was a form he loved dearly, depending on it heavily for personal, professional, artistic, and financial reasons of the greatest weight.

Artistically, the world of the operatic stage spoke deeply to his primal instinct for play, his taste for fantasy, and his restless creative imagination. And in this rich series of eight entertaining lectures, you'll learn how his operas vied with one another for the acclaim reserved for the greatest achievements of human artistic striving: Idomeneo, The Abduction from the Harem, The Marriage of Figaro, Così fan tutte, Don Giovanni, and The Magic Flute, which premiered only ten weeks before his untimely death.

In addition to summarizing Mozart's life and artistic development, the lectures focus on two of his greatest masterpieces, Così fan tutte and The Magic Flute, to help you understand more fully the height of Mozart's operatic achievement.

What listeners say about The Operas of Mozart

One of the best values on Audible!

First of all, I have several Great Courses for which I paid full price from the Teaching Company - I love the courses and get a lot of pleasure out of listening to them. The value of being able to get Great Courses for one Audible Credit per course is ALONE worth an annual Audible subscription.

Second, I think Robert Greenberg's Music Courses are terrific and really one of the best uses of the audio book format for university level lectures. You not only hear the discussion of the music but hear music samples as well which makes it far superior to books about music history which can't provide samples of the music discussed. Greenberg's choices of music to illustrate the points he make are always excellent and really make listening to these lectures an enormous pleasure. Like others have said elsewhere, he can be quite corny -if that bothers you this is not the professor you will want to hear. I find his energy and enthusiasm makes the course more interesting and his attempts at humor are rather endearing (it may be that people from New Jersey find corniness less offensive). I appreciate his attempts to liven things up even if some of the jokes are rather silly.

Third, although I am not particularly knowledgeable about music the more I get to know opera the more I realize how very much I love Mozart's operas. It is true that Greenberg spends a lot of time on Cosi Fan Tutte as another listener noted. I didn't expect this to be exhaustive but rather Greenberg's own view of the most interesting aspects of Mozart's operas since it is still an introductory level course. For someone as prolific as Mozart it didn't surprise me that the professor made a selection based on his views. However, if you are expecting it to be exhaustive you will not be satisfied. Greenberg is very informative but selective, and with me that's OK.

Lastly, some negative comments have been made on the lack of librettos included with the course - those librettos are not part of the more expensive versions of the course either. You have to get librettos on your own - there are no entire operas included in the course, only excerpts so I don't know why anyone would think a libretto would be needed to follow the lectures. Some of the complaints made by listeners are very picky considering the comparative value of getting these courses so cheaply on Audible.

I love Dr. Greenberg's lectures generally. I have listened to at least 5 of his and my possibly my favorite lecture from all of the Great Courses is his lectures on Beethoven's symphonies. This was a strong disappointment for a very simple reason: it's all about the stories of Mozart's operas instead of the music. He spends lecture after lecture explaining a piece of story, then playing the piece, then moving on to the next piece of the story. I could have read the summaries on Wikipedia in much less time. When I purchase an audiobook on Mozart, I expect I'll learn about what made Mozart famous: his music. The music was commented on occasionally, but generally just to tell us that it's very very good, but no explanation as to why, exactly. This was a series of lectures about the libretto's that Mozart wrote music for, not so much lectures about Mozart's music.

This guy is fantastic!

Would you consider the audio edition of The Operas of Mozart to be better than the print version?

Greenberg is an entertainer, as well as being very knowledgable. He had me laughing out loud at his translations and performances, in character,of the recitatives. He makes getting stuck in traffic a pleasure. The only caveat: he dealt with "Figaro" in his opera course; unfortunately he did not include it here (although he certainly apologized for the omission, and included one finale).

Would you consider the audio edition of The Operas of Mozart to be better than the print version?

What about Professor Robert Greenberg’s performance did you like?

In addition to being a first class musician and composer, Professor Greenberg is an incredibly talented lecturer. More academics need to listen carefully to his style. He truly loves his subject, he is exceptionally good at presenting his material and
best of all his down to earth humor makes listening to his lectures a delight.
If only more academics could teach like this our profession would be in much better shape. Kudos to this wonderful Maestro.

If you’ve listened to books by The Great Courses before, how does this one compare?

Not Greenberg's best course. He should have toned down a bit of his humor and discussed the music more. Still, if you find opera inaccessible, this course may be for you.

The man cannot pronounce anything in German to save his life.

Can we get some music courses NOT taught by Mr. Greenberg?

Where does The Operas of Mozart rank among all the audiobooks you’ve listened to so far?

One of my favorites.

Mozart is always interesting and Robert Greenberg's enthusiasm and sidebars make him even more so!

I have been an opera lover for decades, and Mozart's "The Marriage of Figaro" is my absolute favorite. I also like "The Magic Flute" and "Don Giovanni" very much. I wanted to know more about Mozart and his operas, and this title did deliver.

Unfortunately, the first third of the series was devoted to "Cosi Fan Tutte". While I did learn a lot about Cosi, I have always disliked the inane story, and the lectures changed my opinion only slightly for the better.

The middle third of the series was devoted to Mozart's early life and early works, and (IIRC) "Don Giovanni". I found the information, and some of the selections, fascinating.

The last third gave very short shrift to "The Marriage of Figaro". I think Marriage might have gotten 1 lecture (45 minutes), possibly 2. The lack of attention paid to "Marriage" is perplexing, since Dr. Greenberg points out its many stellar arias, particularly the sextet when Susanna learns Figaro's parentage. "The Abduction from the Seraglio" is barely mentioned. A lot of time was spent explaining the Masonic origins and meanings in "The Magic Flute". I've always felt "Flute" dragged during the Masonic tests, but Dr. Greenberg's explanation made those sections more interesting to me, as well as explaining why Pamina joined Tamino for the last test, and why Papageno was not punished for his general bad behavior.

In addition to my disappointment in the relative amount of time spent on the various operas, I also found Dr. Greenberg's voice somewhat grating. I did enjoy his enthusiasm for his subject.

In summary, I'd say that this lecture provides excellent information and musical selections, but I wish Mozart's great operas had all gotten equal analysis time.

Only for those with no experience with Opera

Professor Greenberg's presentation is extremely annoying and off-putting. He is obviously well versed in the material, but he insists on dumbing it down and making everything a juvenile joke. It's alright for a short span, but severely grating a couple lectures in.

Also, while the course does cover aspects of Mozart's life, yielding interesting facts and anecdotes, its coverage of the operas is subpar, being little more than a reproduced libretto, often in a college level humor vernacular. I was hoping to learn more about the music and the methodology of Mozart in producing his operas and evoking response. There's little of a deeper measure. Granted I only made it through the first portion of the series on Cosi, so maybe it improves...but Greenberg's presentation style was insurmountable.

I love Professor Greenberg’s down to earth style and the life he breathes into Mozart’s works and life. I love his Brooklyn accent and humor. As a singer in my youth I take issue with his take on sopranos being nothing but competitive and sharp elbows, but I forgive him for that. Professor Greenberg has really really really studied Mozart’s music and shared that with us. Like sleeping on a book for the listener.

I adore this series!

its an absolute must have for any opera or music buff. I learned so much!

A thoroughly engaging, lively and unpompous guide to Mozart and his operas. Audiobook was made for this type of content and Robert Greenberg's presentation takes full advantage of the medium. i would also recommend the other Greenberg Great Course audiobooks on music. Does what is promised in helping the listener understand and appreciate great music.

Not a great course at all!

What disappointed you about The Operas of Mozart?

I found it impossible to find what I wanted when the chapter/ lecture titles aren’t visible. This needs to be addressed urgently.

Yes. I found Professer Greenberg's enthusiastic and jokey presentation quite engaging although it might not appeal to every.one. He concentrates heavily on Cosi fan Tutte and The Magic Flute possibly overmuch and maybe more insight into the background to the operas and more music rather than a recitation of the plot lines would have been preferable. However overall very enjoyable.