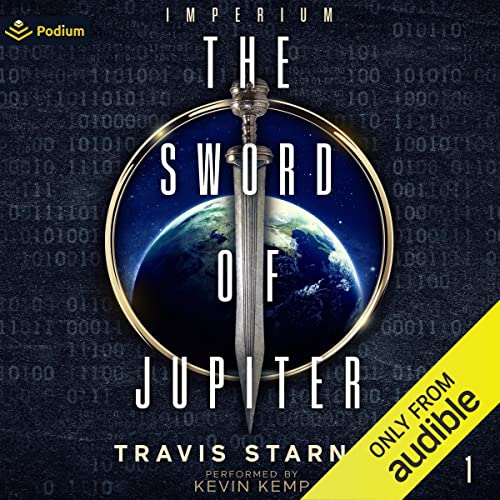 The Sword of Jupiter

An uncertain future in a new past.

During the test flight of a prototype faster-than-light craft, Lt. Commander Ky is flung into an ancient past that never existed. Rome has fallen, defeated by the mighty Carthaginian Empire, its survivors chased off the continent and onto what had been the remote province of Britannia.

Hounded by the Carthaginians bent on conquering the known world, Rome is on the verge of destruction. Stranded and alone, except for a tactical AI implanted in his head, Ky has lost everything and must find a way to live in a world different than anything he's ever known.

For Ky to survive, he needs a new home. For the Romans to survive, they need a miracle. But can a man from the future work with people so far in his past, or is this match doomed to failure?

What listeners say about The Sword of Jupiter

For fans of Destiny's Crucible series well here you go slightly different but similar concept, I absolutely love this type of story congrats to the author he has something special here.

Worried it was going to be too big to succeed

Wonderful idea and so much fun. Lots of ways to go from here. Highly recommend

Good, but only half of book.

The whole book prepares for a battle, then stops. Looks like I need to spend another credit to see how it ends. Makes me feel like I'm getting fleeced for credits. If they only give me half of a book, I'm only giving the book half of a rating.

Reignited my love of audiobooks

If you liked John Birmingham's axis of time series, you'll love this. Same problems of adapting advanced technology, social attitudes, economics etc to an past age and all the intersectionality that goes with it. Its excellent. For the first time in months, a book had me riveted from start to finish. I bought it yesterday and I'm grabbing the sequel when I finish this review.

I have just over 6,000 hours of listening, this is one of the best.

Very different take on a time travel adventure. No longer reliant on the past having happened the way it did before he is able to weave a very enjoyable story. Looking forward to the next installment.

I enjoyed the book. Is it the best thing ever written? No. But it was an good new story.

Great story and the narrator was fantastic cannot wait for book two. This idea hopefully has many stories to tell.

A really great read. I was disappointed when it finished. The narrator did a great job bringing the characters to life, which can make or break a good story. I will look fwd to Book 2.