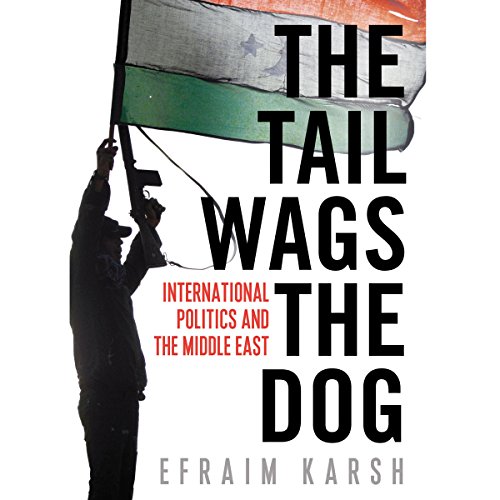 The Tail Wags the Dog

The continuing crisis in Syria has raised a question mark over the common perception of Middle Eastern affairs as an offshoot of global power politics. To Western intellectuals, foreign-policy experts, and politicians, "empire" and "imperialism" are categories that apply exclusively to the European powers and more recently to the United States of America. Lacking an internal dynamic of its own, the view of such people is that Middle Eastern history is the product of its unhappy interaction with the West. This is the basis of Obama's much ballyhooed "new beginning between the United States and Muslims around the world".

Efraim Karsh propounds in this audiobook a radically different interpretation of Middle Eastern experience. He argues that the Western view of Muslims and Arabs as hapless victims is absurd. On the contrary modern Middle Eastern history has been the culmination of long-existing indigenous trends, passions, and patterns of behavior. Great power influences, however potent, have played a secondary role, constituting neither the primary force behind the region's political development nor the main cause of its notorious volatility.

Notwithstanding the Obama administration's abysmal failure to address the momentous Middle Eastern events of recent years, Karsh argues it is only when Middle Eastern people disown their victimization mentality and take responsibility for their actions and their Western champions drop their condescending approach to Arabs and Muslims that the region can at long last look forward to a real "spring".

What listeners say about The Tail Wags the Dog

Seemed Biased right out of the gate

What disappointed you about The Tail Wags the Dog?

In the beginning the author seems overly biased and repeated blames the Obama administration for much of the problems even though clearly the issues in the middle east are long running and complex. Further reading seems less factual and more propagandist in nature. Although I welcome alternative interpretations, I was not interested in what appeared to be agenda based propaganda.

Intelligent analysis. Shame about the reader.

What made the experience of listening to The Tail Wags the Dog the most enjoyable?

What was one of the most memorable moments of The Tail Wags the Dog?

Description of the terrible decisions about the Middle East made by Western do-gooder governments in the early part of the 20th century.

Did Jonathan Coote do a good job differentiating each of the characters? How?

It might not have been Jonathan Coote's idea to do vocal impressions of the various leaders, his director could have been responsible for that but whoever came up with it, the effect was ludicrous. It was simply intrusive to hear Churchill's opinions delivered in a pantomime Churchillian accent but the whole thing became downright surrealistic when the narrator bottled out on doing an appropriate accent for the Arab speakers -- probably on the grounds that it might sound 'racist' -- so while some Frenchman talks with a French accent and Obama comes across all educated mid-western, Yassir Arafat holds forth in classless, flat English. Complete nonsense. He didn't need to do any accents for any of them.

How many mistakes can you cram into one century?