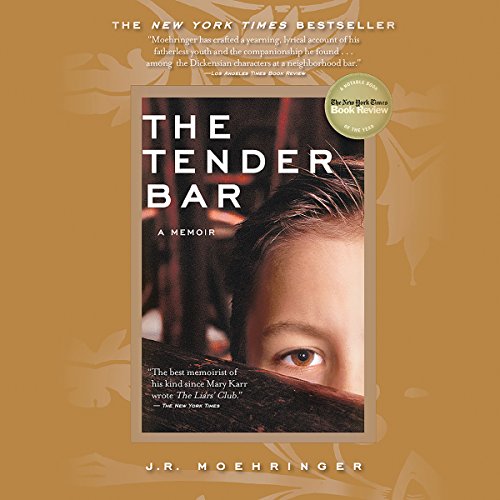 The New York Times best seller and one of the 100 Most Notable Books of 2005. In the tradition of This Boy's Life and The Liar's Club, a raucous, poignant, luminously written memoir about a boy striving to become a man and his romance with a bar.

J. R. Moehringer grew up captivated by a voice. It was the voice of his father, a New York City disc jockey who vanished before J. R. spoke his first word. Sitting on the stoop, pressing an ear to the radio, J. R. would strain to hear in that plummy baritone the secrets of masculinity and identity. Though J. R.'s mother was his world, his rock, he craved something more, something faintly and hauntingly audible only in The Voice.

At 8 years old, suddenly unable to find The Voice on the radio, J. R. turned in desperation to the bar on the corner, where he found a rousing chorus of new voices. The alphas along the bar - including J. R.'s uncle Charlie, a Humphrey Bogart look-alike; Colt, a Yogi Bear sound-alike; and Joey D, a softhearted brawler - took J. R. to the beach, to ballgames, and, ultimately, into their circle. They taught J. R., tended him, and provided a kind of fathering by committee. Torn between the stirring example of his mother and the lurid romance of the bar, J. R. tried to forge a self somewhere in the center. But when it was time for J. R. to leave home, the bar became an increasingly seductive sanctuary, a place to return and regroup during his picaresque journeys. Time and again the bar offered shelter from failure, rejection, heartbreak - and, eventually, reality.

In the grand tradition of landmark memoirs, The Tender Bar is suspenseful, wrenching, and achingly funny. A classic American story of self-invention and escape, of the fierce love between a single mother and an only son, it's also a moving portrait of one boy's struggle to become a man and an unforgettable depiction of how men remain, at heart, lost boys.

What listeners say about The Tender Bar

The author and narrator do a great job of making you feel like you are right there in the bar and in the heart of the story ! Loved it and didn’t want it to end

As good a performance I can remember hearing, and a cast of characters who deserve to be brought alive.

First time author for me. After I got this book I realized there was an abridged version of 5 hours versus this unabridged version of 16 hours. I admit I was somewhat intimidated by a 16 hour memoir, thinking that's a long time for someone to write about their life centered around a bar. But I dove in and in the end it was an interesting listen. Beside, I always feel cheated by abridged versions of books.

The bar in question was in Manhasset, Long Island, NY. The author called it 'the place' where all walks of life, all ages, both men and women went to as their main social place of gathering. It took on a life of its own. If you weren't careful you could drink more than your fair share which many people did. The patrons and the owner were the support group for the rest of them.

Into this scenario, the author grew up. His uncle was a bartender, the owner, the bartenders, the customers all knew him from a young age. His mother moved him to Arizona in middle school and he graduated from high school there, David Spage was a classmate, but he returned to New York when he enrolled at Yale, just a short train ride up to New Haven. During college and after college the bar became the center of his life. When life was tough on him he sought solace there, he sought solace there even when life wasn't so tough on him. It was his world.

Still he eventually outgrew the bar and moved on with his life. He looked back at it with nostalgia and what it had meant to him. H wrote this book about that experience. He mentions toward the end of the book that when he sobered up was when he started growing up. For some people it takes that strong of a step. I'm one who has imbibed adult beverages most of my audlt life and I feel like I've had a successful, productive life with a great wife, kids and career while enjoying that past time. But, hey, to each their own, it was a good listen and I piked up some pears of wisdom from it.

This was captivating from the first 5 minutes of the listen. JR (no periods) Moehringer is a weaver of gut-wrenching, hilarious, and colorful stories that entertained throughout. But immense praise also goes to Adam Grupper for bringing his work to life - the accents, the interpretation. Brilliant.

Get the pronunciation of Plandome Road corrected. Making me crazy. Don’t know if I can get through the rest of the book because of this. Not sure how this made it through without the author noticing this.

Beautiful story line. Enjoyed the performance of the narrator. Living abroad, it brought me home to New York, I saw and lived the story vividly.

So many memories of people, places, and events kept popping to memory for me during this book .... So tender, sad, loving, sweet, scarey + satisfying all in So Many Ways. GREAT BOOK - 💜💜🎉

Emotions with the Tender Bar

So many different emotions. This narrator even made me laugh out loud at times. Fantastic audiobook!

I just finished listening to this book and I think it will stay with me for a long time. one of the most tender, passionate, humble and human story I ever met. Thanks to Andre Agassi for the tip!