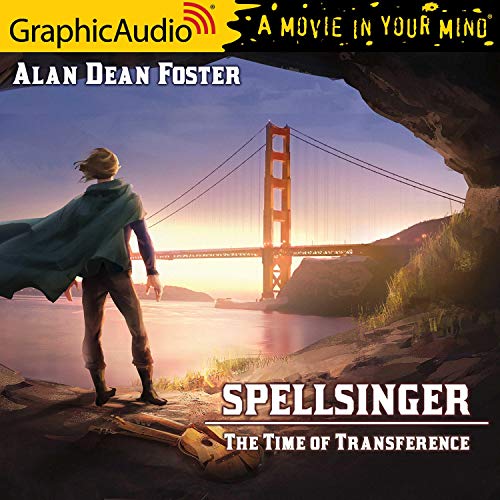 The Time of Transference [Dramatized Adaptation]

When his magical multistring duar snaps in half, Jon-Tom the spellsinger sets out on a journey that will take him all the way back to...America!

Jon-Tom has been trapped in a strange land of talking owls and wizarding turtles for a year now, his sole consolation that in this universe his musical abilities have inadvertently made him something of a sorcerer. But when an encounter with some burglars leads to him snapping the magical duar that channels his power, he finds himself an ordinary human again — on a quest to repair his instrument with nothing but his staff and his semi-faithful, ever-complaining otter sidekick to defend him.

The journey takes them to the ends of the Earth — and beyond. On the run from some half-wit pirates, they dart into a cave and find themselves in San Antonio, the shortcut to home that Jon-Tom has long dreamed about. But Texas wants nothing to do with this long-haired wizard, or the unpleasant creatures who are tracking him.

What listeners say about The Time of Transference [Dramatized Adaptation]

Enjoyable beyond it years!

Just another tale from the mind of an exquisite entainer. If you've read the books or listened to the books previous to this one and have enjoyed them then this one is a masterpiece! You will love all the way to a nip on your shin.