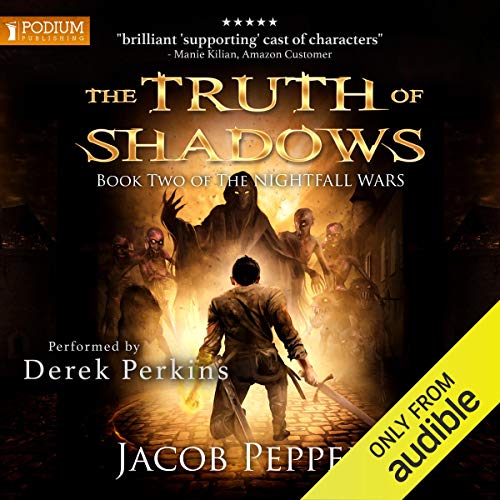 The Truth of Shadows

Three strangers chosen by the gods. A castle-servant who can bend fire and light to his will. A musician whose song can soothe even the wildest of hearts. And a nobleman with the gods' own luck.

Three strangers gifted with powers beyond that of normal mortals stand against the armies of shadow.

But there are other gods, other powers lurking in the darkness, and they, too, will find their champions.

Hunted by mortal and immortal enemies alike, Alesh and his companions flee south to the Ferinan lands. There, they will search for help they desperately need, those who might stand with them against the coming darkness.

A nobleman without hope. A musician to whom every song sounds like a funeral dirge. A castle servant at risk of being consumed by an evil greater than any he has faced.

They have set themselves against the coming Ever Dark. But shadows are not easily conquered, and no matter how many are cut down, more rise in their place.

For the truth of shadows is that they are not born.

What listeners say about The Truth of Shadows

bastards with a hoarse tone!

The world building and character development in this book are fairly good, but there is something missing. I like the fact that it has a little bit of wisdom in it here in there. The plot is somewhat weak and redundant.

As in a fair amount of this genre, there is not necessarily a feeling of purposefulness, even while various characters are driven

Some borderline series get better as they go. This one got worse. Half way through & I'm done.

Waste of time and credit

An almost complete waste of time. The story dragged with meandering monologue and dialogue. The plot was purposely stunted at many points before the story picked up again. I bet the third book will be rushed as this book was a waste of time. Characters remained undeveloped. We still don’t know what exactly Catherine’s power is. When they were attacked by the villagers it seems her power should have been used to reverse what corruption had taken over their minds as it had with the guard.

An oddly compelling tale involving fight after bloodthirsty descriptive fights which, because of the story and character building, is not as tedious as it might be. Despite the endless gory fights, I wanted to know what happened next and so, bizarrely, I recommend it and look forward to the next instalment

love love love! great book, well done to the author and the narrator did a good job as usual. I do love that narrator. but this book is a definite one to listen to cant wait for the next one. the only downside was waiting so long for book 2 I do hope we don't have wait for book 3