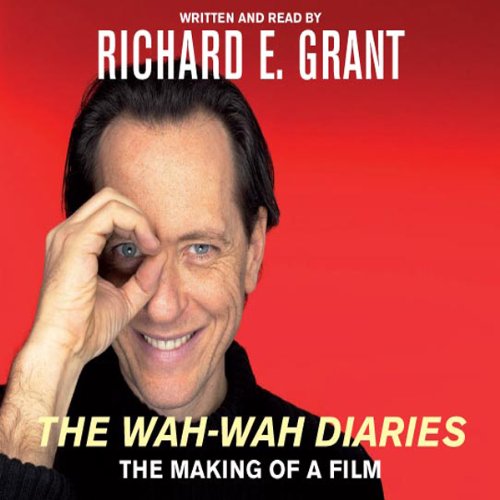 Here are the very personal diaries of Richard E. Grant's debut behind the camera, as writer and director of his autobiographical movie of the same name.

It is both a fascinating insight into the intrigues and agonies he encounters along the way, and also a deeply moving portrait of his childhood and his love affair with Swaziland, where he was born and brought up during the last throes of the British Empire.

Through the mayhem - never-ending financial pressures; hostilities, and finally breakdown of communication with his producer; the nerve-racking quest to persuade the King of Swaziland to grant permission to film in his country; the assembly of a stellar cast including Gabriel Byrne, Miranda Richardson, Emily Watson, and Julie Walters - Richard E. Grant has written and reads, with characteristic humour and charm, an extraordinarily honest and revealing account of a labour of love and the realisation of a dream.

What listeners say about The Wah-Wah Diaries

have always been a fan of Richard E Grant. superb actor, great stories. had i never heard of him, i would have thought i discovered buried treasure. first of all - everyone should see at least two of his films WITHNAIL AND I and HOW TO GET AHEAD IN ADVERTISING. then you can rest assured that your purchase of this audio book will be well worth it. Grant journals the story of how he made the Wah Wah diaries. He writes about everyone he's come across professionally and personally - and it's a wonderful account. he's dropping names because they are his contemporaries. you will not be disappointed. His Bob Altman stories from The Player and other Altman films are inspiring. If you work as a writer in this crazy town, and you're feeling a bit blue - this book's for you. If you're interested in the reality of raising money, casting, shooting - you can fake being a seasoned producer by the time you're done. It's a wonderful listen. Read by one of the great actors of our time.

The Perils of Film Making

Loved this book, thoroughly enjoyable ride into the highs and lows of making a film.
Richard E Grant is fabulous as the narrator as he takes us on his personal journey full of triumphs and disasters. I hope Audible adds his other book With Nails: The Film Diaries of Richard E. Grant to its library.

An Actor's Actor Makes a Movie

Richard E. Grant is a phenomenal actor (his portrayal of Sir Andrew Agueface in Twelfth Night is one of my favorite renderings of Shakespeare's character) but this is his story of the writing and making of a film. So this is a great insider look at the craziness of the film world. I had never heard of the film until I saw this audiobook advertised (a defect since remedied) but it is a gem of a film. It (the film) is the autobiography of Grant and is a tremendously moving film as well as being a comic pleasure. Grant's African childhood form the narrative but this audiobook is a look at how casting works (the number of actors who expressed interest in and then backed out of being in for various reasons is a Who's Who of mainly British actors), the overwhelming complexity of financing a film, and then the agony of editing a modern film are thoroughly documented here. Ultimately, though the listener knows that the film will be made, Grant vividly shows how many times the film seemed like a doomed enterprise. This book is worth the credit just to listen to a great actor read, but what makes it special is that Grant is such a thoroughly likeable person that I think it would be impossible for a fair person to root against him.

I like Richard E. Grant very much and hoped his book would be enjoyable. I wasn't disappointed. He reads it with enthusiasm and laughs when obviously it was funny when it happened. So you get a feeling of being there very much. The only thing was I thought it could have been trimmed by about 15 minutes. The build up to the filmimg was great and I enjoyed the later episodes of the editing and promotion more than the actual filming part of the story. But thats only me. Well worth the purchase.

A fantastic insight into the world of filmmaking

I stumbled on to this book after hearing its mention on the empire podcast. Richard E. Grant was being congratulated on his Oscar nomination. He came across so humble and funny in podcast I thought I’d give the book a listen and so happy I did. The book is a tells the story of the making of the movie, from the very first meeting with a producer to movie getting a distribution deal, and all the ups and downs in between. Richard E. Grant doesn’t so much perform the book but relives each moment and you can you can hear genuine joy and sadness as he reads his own words. I’ll never look at an independent movie again in the same way. The blood, sweat and tears that went into making the move are all there. I was sorry when I finished it, because it was so interesting and enjoyable. I look forward to seeing the movie.

Good Effort, too much Details

I have tried so hard to listen to this books but my mind kept wondering off. To me, who has read nearly 1000 books, it's a sign of boredom. It's an extremely (please underline extremely) detailed account of the making of his life story into a movie. At one point Grant writes (in excruciating detail) EVERY actor who tuned the project down (with details of the actual conversations!) Instead of simply writing "several actors turned me down". I almost got to a point where I was saying out loud "just take the project and lets move on!!".

...Has anyone ever watched those youtube videos made by first timers who keep the camera rolling while they wait for milk to boil or food to cook instead of editing "the waiting" out? Well this book is the written versions of an unedited story. Really liked the hotel TV show, this book though? Sorry not so much

Warm, witty and charming as I imagine the man to be. Delightfully scathing but only of the French producers