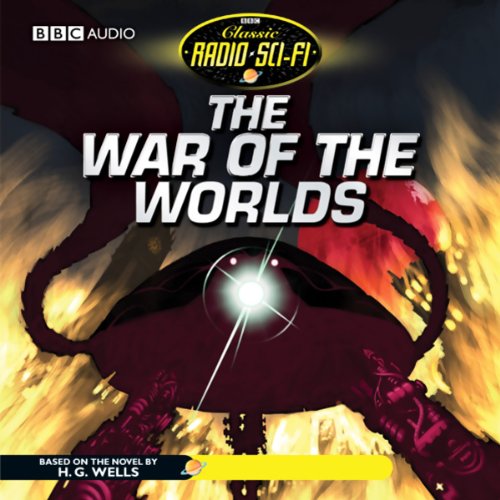 The War of the Worlds

What listeners say about The War of the Worlds

Music is very annoying and distracting

The music used for each episode is simply awful - loud, shrieking and annoying. This would be a great production if the music were edited out.

Yeah, the intro and outro music is loud and repeats, kind of like the Tarzan radio series listened to back to back. this was originally split up across multiple nights and was very creepy back in the day listening late at night. Aside from that, this is my favorite version of war of the worlds. Yes the Jeff Wayne musical is unique and good but if your wanting a classic CBS mystery theater story with all the voice actors and sound effects this is the one.

This was clearly a serial, which is not the issue. The problem is that the producers left in all the lead in and credits for each installment, which becomes extremely annoying by the end of the recording.

The sounds effects were also a over the top for my taste.

I've heard other recordings of this story that I enjoyed more.

I first listened to this dramatised version of The War Of The Worlds when I was a young lad, my dad recorded it on a very old spool tape recorder. I kept it for years, listening to it when I was aloud to, until the tape recorder broke. To listen to it again just brings back memories. Its the best version available. Thanks Audible, I'm now going to wear my ipod out.

This is a muscular and violent production as radio dramas go and its all the scarier and more vivid for it. The production values are strong and the cast is excellent. I'd give it 4.5 if I could, the only downsides being the slightly melodramatic opening titles and the outdated female character. That said, its still a treat.

I first read the book when I was about 12 and had the attention span of a bored chimp. But the book gripped me in a way that got me told off many times for reading in bed when I should have been sleeping. This audio rendition from the BBC managed to do exactly the same. I switched on my ipod and didn't switch it off until I had listened to all 6 episodes. The actors were excellent in their reading of the script and although not the original time setting the play relayed the fear and excitement that I felt when I originally read the book. The only criticism I have is of the rather over melodramatic title sequences that I felt could have been edited out, this aside I would recommend that any fan of H.C.Wells or indeed War of the Worlds in its many different forms download this without hesitation, they will not be dissapointed.

Loved it and the sound effects mixed with the claustrophobia of it all just make this a great listen.....especially in the dark

War of the Worlds

I might be a little biased as this is one of my favourite stories. It's a great adaptation, I much prefer it to the Orson Welles (although the idea was very interesting, this is just easier to follow and far more gripping in terms of sitting back and relaxing with some entertainment). I listened to a chapter a night before bed and it certainly gave me chills. Some great acting and the sound effects are marvellous.

I felt very involved in the plot, wanted to scream at certain characters. I've listened to it over about three times.

It's great whether or not you know the original or any of the other versions. The story follow a good plot at a great, easy pace and is never dull.

From start to finish this book gets you gripped. i have heard the War of the Worlds before but i was on the train listening and did not want to get off. Very well read. If you are thinking of buying this book then do. It is great.

Entertaining and obsessed with alcohol throughout!

What was one of the most memorable moments of The War of the Worlds?

Fantastic, but hasn't aged particularly well in the old sound effect departments, made me laugh so much but all in a good way. Great to listen to whilst I'm at work! I noticed how at every opportunity there is an obsession with alcohol!... and they say there is a problem with alcohol consumption nowadays! How times have changed. At one point he drinks 2 stiff brandys before going for a drive hahaaaaaa!

Over all I loved it and I've listened to it 4 times already, even the kids were entertained by the 60s style analogue sound effects! All in all, a wonderful story that I have fascinated over since I first became aware of it.

I'm in love with this story. Just love it.

Seen all the films, and I just love this audio story off it. I get right into it, makes me shudder the story and the way it is told is really good I it is one off my favourites I love listening too. Wish there was more off these to get.

The dramatisation is very much of it's time and the series' scary music had my husband and me giggling each time we heard it. Nevertheless it was a very enjoyable listen for our car journey. The kids liked the music, weirdly. The story, although flawed, is still powerful. And for us all the mentions of a devastated SW London were interesting. The War of the Worlds takes place in our manor!

Great voice acting and pace at which the story was told. Annoyingly loud soundtrack however.