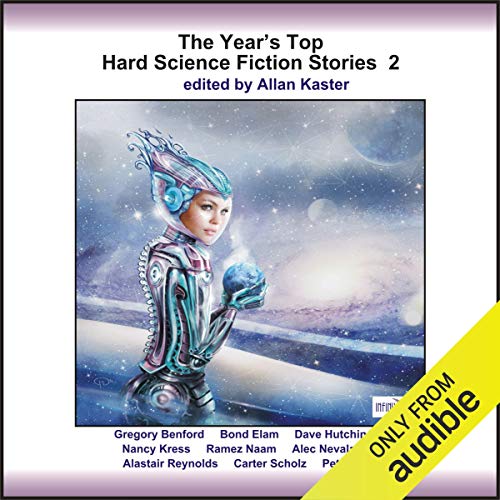 An unabridged audio collection spotlighting the “best of the best” hard science-fiction stories published in 2017 by current and emerging masters of the genre, edited by Allan Kaster, as narrated by Tom Dheere and Nancy Linari.

In “Shadows of Eternity” by Gregory Benford, a student investigates enigmatic SETI recordings from probes sent to nearby stars despite her teachers’ admonishments to stick to the curriculum.

As war and pollution ravage the last survivors on Earth, an alien robot descends to help save the planet in “The Chatter of Monkeys” by Bond Elam.

In “Acadie” by Dave Hutchinson, the first humans still, even after 500 years, hunt across the stars for their augmented children who have left Earth in search of paradise.

The crew of an exploratory starship finds an icy moon that might harbor life in “Canoe” by Nancy Kress.

In “The Use of Things” by Ramez Naam, an astronaut struggles to survive after being jolted free from an asteroid while on a solitary prospecting mission.

A problem with the local birds threatens the rebuilding of Bikini Island as sea-levels rise due to global warming in “The Proving Ground” by Alec Nevala-Lee.

In “Holdfast” by Alastair Reynolds, a genmod human soldier faces off with an alien warrior in the inhospitable terrain of a superjovian planet.

A Russian astronaut, gathering debris in near-Earth space, must make tough moral choices when asked to carry out a special mission in “Vanguard 2.0” by Carter Scholz.

And finally, after a terrorist attack, a technically dead fish farmer gets a new body and second chance at life as an experimental super soldier, in “ZeroS” by Peter Watts.

Overall, I enjoyed most, though not all, of the stories. One or two weren’t necessarily what I would consider “Hard” science fiction, but weren’t bad nonetheless.

My only major complaint is that the audio for all the stories narrated by Nancy Linari sounds like it was compressed too much. Her voice was distorted and barely understandable. There were numerous times I had to rewind and crank up the volume just to understand some words or phrases she was saying.

It was especially jarring when it switched back to Tom Dheere. His audio was very clear. It was as if they were from two different audio books entirely.

I probably wouldn’t recommend this purchase simply because the quality of the stories doesn’t make up for the frustrating sound issues.

The audio quality of this is way below expectations.
The audio is overly compressed with annoying compression artifacts and low fidelity, making it very hard to listen to.
Also, the readers’ performances come across as stilted and wooden.

I would love to have a high fidelity and lively reading of these stories. Forced to rate the stories, even though i haven’t listened to them all due to terrible audio quality.

I find it impossible to listen to this book. It sounds like it is read in a tin can with recording in low bitrate. Terrible!