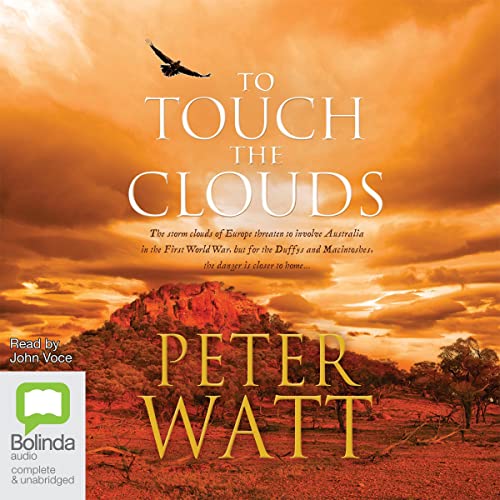 To Touch the Clouds

To Touch the Clouds is a powerful continuation of Peter Watt's much-loved saga of the Duffy and Macintosh clan, which all began in The Cry of the Curlew.

'They had all forgotten the curse...except one...until it touched them. I will tell you of those times when the whitefella touched the clouds and lightning came down on the earth for many years.'

In 1914, the storm clouds of war are gathering. Matthew Duffy and his cousin Alexander Macintosh are sent by Colonel Patrick Duffy to conduct reconnaissance on German-controlled New Guinea. At the same time, Alexander's sister, Fenella, is making a name for herself in the burgeoning Australian film industry.

But someone close to them has an agenda of his own—someone who would betray not only his family but his country to satisfy his greed and lust for power. As the world teeters on the brink of conflict, one family is plunged into a nightmare of murder, drugs, treachery and treason.

"The homegrown version of Wilbur Smith." (The Sunday Age)

What listeners say about To Touch the Clouds

Another excellent book by Peter Watt & narrated by John Voce. Can't wait for the sequel!