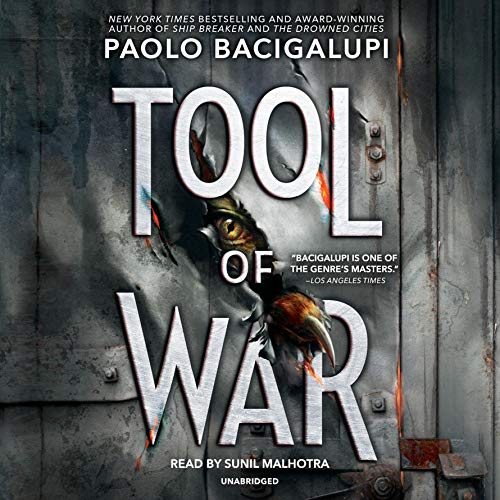 This third book in a major series by a best-selling science fiction author, Printz Award winner, and National Book Award finalist is the gripping story of the most provocative character from his acclaimed novels Ship Breaker and The Drowned Cities.

Tool, a half man/half beast designed for combat, is capable of so much more than his creators had ever dreamed. He has gone rogue from his pack of bioengineered "augments" and emerged a victorious leader of a pack of human soldier boys. But he is hunted relentlessly by someone determined to destroy him, who knows an alarming secret: Tool has found the way to resist his genetically ingrained impulses of submission and loyalty toward his masters.... The time is coming when Tool will embark on an all-out war against those who have enslaved him.

From one of science fiction's undisputed masters comes a riveting audiobook that pulls no punches.

"Suzanne Collins may have put dystopian literature on the YA map with The Hunger Games...but Bacigalupi is one of the genre's masters, employing inventively terrifying details in equally imaginative story lines." ( Los Angeles Times)

I'm a little sad I bought this one. It is technically science fiction but the science and cultural aspects are only lightly touched on. It deals with conditioning of soldiers but really misses on it's attempt for greater meaning. The ending is also kind of a non-ending. No greater resolution or profound statement. The whole thing seems a little lacking and repetitive. Bacigalupi's quintessential and profound novel remains Wind up Girl. Everything he has written since seems to be backwash. I will continue to buy his novels though. Another diamond may yet appear.

I can’t get enough of this author. I find every book in this particular series is even better than the last!

Another Triumph By P.B.

Great trilogy. Sorry that is concluded, but it was a find finish. Paolo, please write another adult novel; your last was Water Knife. I realize that YA literature is where the money is today. As fine as Water 🔪 w were of course Windup Girl. Plus I love the short, Dharma In My Pocket; all adult lit. Please, please tackle​ another environmental novel. You are a significant voice for the near future of the planet under climate change! I will continue to read and listen to anything that you write, but i am waiting your next adult novel.

JA (for the main characters; not the plot), post-apocalyptic science fiction novel by Bacigalupi - a gifted imagination focusing on water issues in the future. I have enjoyed Bacigalupi's adult novels (Windup Girl, Water Knife) and thus eagerly picked up this trilogy. I was not disappointed. Cutting to the punchline: I highly recommend all three books, which each read fine as a standalone novel (because each one features a different main protagonist) but is also fantastic read as a trilogy.

This third and final book in the trilogy focuses in on Tool, a supporting character in the first two novels, and pretty much the main point of the entire trilogy, IMO. Frankenstein-like themes are explored as genetic engineering purposed towards profit and domination while Tool's fate is no less narrowed due to his genetic makeup than any of ours. The plot kind of takes some liberties to tie things up, which is too bad as the author is brilliant, but nevertheless, I found this book to be very worthwhile in reading. I really enjoyed it and its 2 predecessors.

Audible special note: for some reason, the narrator of the first two books is not the narrator of this book. I had a bit of a time adjusting to the new narrator (I like the other one much better) but overall, he did a great job and if not for his predecessor, there would not be those giant shoes to fill.

Great ending to a gripping trilogy. No one messes with Karta Kul The Tool Of War

I loved this story. Tool is my favorite character. I was so happy he got his closure.

I ALWAYS AM TRANSPORTED. IT FEELS LIKE I know Tool, and I lobe all the vibrant and complex characters.

Love these drowned city books, they always make a good story about what could happen.

What an excellent third book to the trilogy! I so loved all three books. Thrilling, creative, heart felt storyline. And a great writing style, so well written, am totally recommending to everyone!!

a disappointing effort from PB

Ends (I hope) the Ship Breaker series and that's about the best I can say for it. Trivial story in what once was a fascinating (if depressing) possible future. Still, it wasn't a bad listen, but nowhere near Bacigalupi's best efforts. Sunil Malhotra did a fine job as the audio talent.

As good as the last one

Same quality story as the last book. Wraps up nicely at the end. But weird having a different narrator but I mostly didn’t notice after the first hour

What a great story.

Taking great care of the character he created Paolo does him proud by telling his story to the end. Great action and people. Don't worry Paolo we still get the politics as well. The world is real in its potential so we just have to keep telling stories like this one to avoid it.