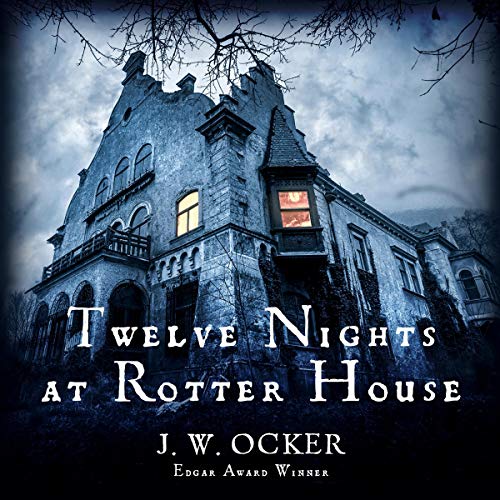 Felix Allsey is a travel writer with a keen eye for the paranormal, and he's carved out a unique, if only slightly lucrative, niche for himself in nonfiction; he writes travelogues of the country's most haunted places, after haunting them himself.

When he convinces the owner of the infamous Rotterdam Mansion to let him stay on the premises for two weeks, he believes he's finally found the location that will bring him a best seller. As with his other gigs, he sets rules for himself: no leaving the house for any reason, refrain from outside contact, and sleep during the day.

When Thomas Ruth, Felix's oldest friend and fellow horror film obsessive, joins him on the project, the two dance around a recent and unspeakably painful rough patch in their friendship, but eventually fall into their old rhythms of dark humor and movie trivia. That's when things start going wrong: screams from upstairs, figures in the thresholds, and more than what should be in any basement. Felix realizes the book he's writing, and his very state of mind, is tilting from nonfiction into all-out horror, and the shocking climax answers a question that's been staring these men in the face all along: In Rotter House, who's haunting who?

What listeners say about Twelve Nights at Rotter House

How to cook up the perfect haunted house mystery: Combine a fresh narrative, a character-driven plot populated with flawed yet relatable characters, and a spicy subplot. Place on a creeping, slow-burn while gradually adding several anxiety-inducing scenes. Add a dash of existentialist spiritualism, a little horror-appreciation club, and turn up the heat with several panicky moments where you want to stop listening but can't, and maybe end up wondering if anything untoward might be lurking in your wardrobe.
Finally, introduce a narrator skilled enough to render himself invisible (along with a genuine enthusiasm for the content), for the perfect Halloween treat. I hope to hear more from J. W. Ocker in the future, with any luck, narrated by Matt Godfrey. They're a match made in heaven. And, of course, by heaven, I mean hell.

A Plodding and Pointless 7 hours.

The title, "Twelve Nights at Rotter House" is a punchline to joke that is only revealed in the final pages. Of course, some reviewers had warned that this is not your typical haunted house book; no jump scares, no sudden frightening moments. I was curious because who doesn't like a good haunted house book and the reviews were terrific. The book is a plodding, slow (and I mean very slow), unrevealing diatribe of endless dialogue between two troubled ex-best-friends trying to sort out hard feelings in a supposedly haunted house. But dear reader, nothing happens apart from a few psychological twists that leaves you wondering if the house is really haunted or not. The performance is very good but the dialogue is so constant that the reader often struggles to keep two voices clear and separate. It's not his fault. This book takes you nowhere. There are basements, there are spooky legends, but there's nothing but relentless talk; about horror movies, about ghosts in pop-culture and arguments on top of arguments with a side of sexual betrayal. The payoff comes in the final pages and is so glaringly predictable that you find yourself begging for your seven hours and 47 minutes back. I stayed to the end but caution readers to read the reviews here and on Amazon before spending the credit. This one is just bad.

A Haunted House that Becomes More

Felix is a writer, desperate for a successful new book, and he decides to spend 12 nights in the haunted Rotterdam Mansion (aka Rotter House), to document its history and ghosts. With his best friend, Thomas, along for the ride, what should be a two week escape from the world quickly turns into something sinister.

This book took me by surprise. I am familiar with Ocker's work as a travel writer on his Odd Things I've Seen (OTIS) blog. I went into 'Twelve Nights...' expecting a haunted house story, and discovered something else, a horror story that cuts bone and soul deep, and a pair of characters I came to care about, even as I learned their secrets.

Matt Godfrey's narration is exceptional. He performs Felix's skeptical, casual disregard for the paranormal with an audible smirk, and Thomas' counter personality with an equally audible empathy and care. This is the second novel I've listened to that featured his narration, and I will seek out more. He is excellent.

It might be odd to visit a haunted house story in December, but this one filled the need for a chill. Highly recommended.

This book was creepy from the start. I didn't see the ending coming either. Matt Godfrey dine an awesome job with the narration. I just love that shake to his voice. Made the story all the more creepy.

I was given this copy by the author but chose to leave my thoughts.

Pretty boring; but I had to finish it.

If you’re looking for something exciting, this really isn’t it. It’s a slow uptake and too much dialogue-not enough action. The narrator is VERY talented and he’s the reason I listened until the end.

Engaging from the beginning, solid storytelling. Well-paced and never boring. This story is about much more than a mere haunted house.

I did not see that coming and was totally taken by surprise. well worth the listen, 5 stars all the way around.

Felix wants to do a different kind of story in this old Haunted mansion . But is it truly haunted? Or is it something else ? A twisted tale in more ways than one . Don’t read this one alone or in the dark .

If you’re looking for a scary story to take you away from COVID-19 world this ain’t it. Story is bad. Reader is not good. Awful.

Blew me away that's

I finished this story and right away looked up other books this author wrote. I cannot wait for his next book to come out great plot, snappy dialogue, likeable characters what's not to love! The creep factor was there I was not disappointed at all great twist on a haunted house story

It's hard to add anything to the "haunted house" genre -- it's a vein of fiction that has been mined pretty well to exhaustion. A writer has to do very well to compete with the likes of MR James and Shirley Jackson, not to mention Stephen King. Surprisingly, perhaps, this book kind-of succeeds. It has all the usual haunted house tropes that we all know and love (or groan along with, anyway), but it also has a strong element of psychological drama that is rarely present in this kind of story. I can't say any more without giving things away but, even though I'd started to guess that the ghosts weren't quite what they appeared by about half-way through the book, the ending was still something of a surprise.

Like the narrator more than the story. A little predictable but kept my interest to the end.

I loved the voice of the narrator was really effective at bringing the book alive !!! struggled with the story tho bit basic gd twist to it mind. overall I think if anyone else had tryed to tell this story it would not have worked so well.again the narrator made this !!!

Not your regular haunted house tale

Recommended for lovers of haunted house tales. This one however is unpredictable and not as I anticipated. Very clever and a fantastic ending. Loved it!