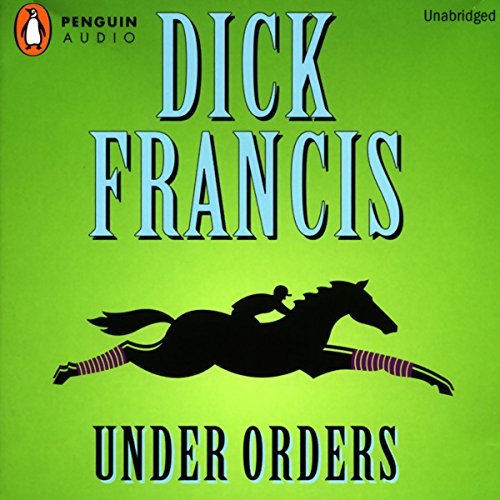 Sid knows the perils of racing all too well, but in his day jockeys didn't usually cross the finish line with three .38 rounds in the chest - which is how he found Huw Walker, the winner of a coveted race only a few hours earlier. Now Halley's quest for answers will push him to his very limits - both on and off the track.

"Dick Francis is a genius." (Los Angeles Times)
"The writing and action are as crisp as ever." (Publishers Weekly)

What listeners say about Under Orders

<p><strong>Under Orders</strong> is the fourth book in Dick Francis’ series featuring one of his most popular detectives, ex-jockey Sid Halley, who turned to investigation after an accident (and a villain) left him without one of his hands. Previous stories in the series are <strong>Odds Against</strong>, where Sid adjusts to the loss of his marriage and his career as a jockey while working for an investigative firm, followed by <strong>Whip Hand</strong>, where he strikes out on his own as a detective with trusty sidekick Chico Barnes, and <strong>Come To Grief</strong>, where his relationship with the “Cassandra Committee” begins. Each book presents an not only an interesting puzzle, with illuminating insights into the world of British horse racing, but also lets you see how Sid grows and changes with his life experiences and with modern developments.
<p><strong>Under Orders</strong> shows us an older, more settled Sid Halley who, at 38, has finally found his new love, the humorous Dutch scientist Marina. The interplay between the two enlivens an interesting story that involves race fixing, internet gambling, and murder. The plot presented many surprises with Francis’ usual twists and turns, including the identity of the villain. In other areas it was predictable, leaving you wanting to tap Sid on the shoulder and say, “Hey, you are overlooking this!”
<p>Although Tony Britton is my favorite Dick Francis reader, Martin Jarvis did a wonderful job and did not detract from my enjoyment of the story in any way. His reading is slightly more boisterous than Tony Britton’s but he does very well with town and country British accents from various classes.
<p>All in all, this was a good story and an absolutely essential listen for Dick Francis enthusiasts. Fans of Sid Halley will be delighted to be reunited with his most popular detective.

Read this one Fourth

If you like one Dick Francis mystery, you will probably like them all (if you get a good reader - which is usually the case fortunately). He wrote four mysteries featuring ex-jockey Sid Halley: Odds Against (1965); Whip Hand (1979); Come to Grief (1995); and Under Orders (2006). Even though the books span 40 years, the elapsed time within/between all the stories is about 3 or 4 years. Technology advances with the times from book to book and we aren't supposed to notice that as readers. After all, it's really the mysteries and Francis' quality writing that we're here for, isn't it? Of the four, I felt this was the weakest - but still worth it to complete the set. I'm not a big Martin Jarvis fan and this was also the first book Francis published after a long absence from publishing due to the death of his wife.

This is not Dick Francis prose.

I understand that when this book was written Dick Francis was still alive but I don't think he had much to do with the writing of it. Dick Francis style was elegant, without the overly dramatic strokes in this work. I remember when he wanted to convey fear or anxiety in a character he would use "ye gods". He was never crass or vulgar when it came to sexual situations and Syd Halley (one of my favorite characters of all times) is so different to the Syd on Whip Hand or Come to Grief that you can recognize him. I think Felix Francis should leave well enough alone, star writing under his own name & stop using his father's inimitable style to further his own career .

Clearly written by Felix Francis, not his father

Under Orders starts off with the same competent enjoyable writing we've come to expect from Dick Francis. Somewhere--I haven't been able to identify exactly where--it's clear that his son took over the writing. The rest of the book has the son's simplified phrasing and noticeable lack of all the little details that made Francis senior's writing so good--the powerful but spare descriptions of the surroundings and the understanding of motives and psychological drives. And of course the character development, which is entirely lacking in this book. Martin Jarvis's overblown reading just adds to the mediocrity of the final product. He reads as though he's secretly thinking how much he dislikes the book and hopes it won't take much longer to get through it. I listen to this occasionally because I paid for it, so I might as well get my money's worth. But it will never be one of my favorites.

Who else co-wrote this book?

Over a period of 35 years, I have read and/or listened to every Dick Francis book written so was excited to find that a new one was about to be published. This one is "ok" but there is something about the book that does not feel genuine. A new reader may have contributed partly to this feeling, but it is more than that. Maybe Dick Francis is just getting old - or maybe I am.

Disappointed in the Narrator

Under Orders is the third book in Dick Francis' set with Sid Halley as the protagnoist. Under Orders is the first and has Geoffrey Howard as the narrator. Unfortunately Geoffrey Howard died in September of 2014 and I just couldn't get used to Martin Jarvis as Sid Halley's voice. I have listened to other recordings of Dick Francis by Martin Jarvis and haven't had an issue, but, for me, Mr. Howard really captured Sid Halley's voice. I also didn't like how he portrayed Halley's father in law.
The second book with Sid Halley as the protagonist is not on Audible.

Fabulously written and read. Another masterpiece

Absolutely! Riveting, cannot put it down?

What was one of the most memorable moments of Under Orders?

The plot and tenacity and just brilliant writing

Portions made me chuckle with the cleverness

I enjoyed this story very much and I think the performance was excellent. The accents were great (though I have always wondered why neither of the narrators who worked the Sid Halley novels didn't give him a Liverpool accent, since that's where he was born & raised. Shouldn't he have sounded more like John Lennon in the early days?) Back to the story and why I enjoyed it. Sid Halley is my favorite Dick Francis protagonist. I've read the other books as well, and the personality is consistent. The thing that is most different about this one, aside from the technological advances, is that it isn't as violent as the others. The story is more mind-games than go-beat-'em-up action. I know many won't appreciate that, but it's nice that there was only one martyred Sid episode in this one. No, it isn't edge of the seat, but it's a nice read anyway. Kept me going while I was doing other, mindless things.

Under Orders by Dick Francis

Reliable great story telling with the rare repeating character Sid Halley, worth the read, or in this case listening to. Exciting adventure!

Good but not the best

I'm a fan of Dick Francis for the characters, the texture, the integrity. This one has all that, but it's slowed by some padding in the plot.