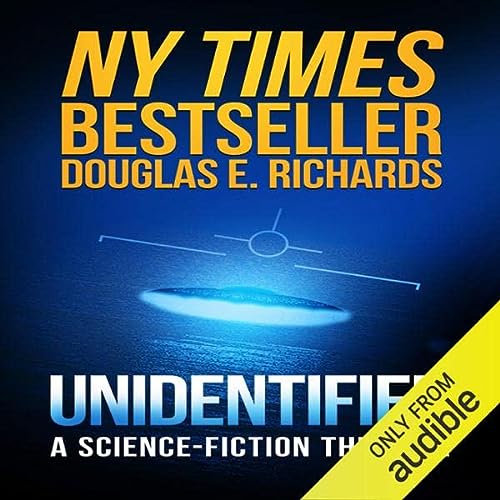 UFOs are real. When Jason Ridley discovers their shocking agenda, his actions will either transform humanity...or destroy it entirely. Unidentified details the actual evidence that UFOs are here, while offering a mind-blowing fictional take on the reasons why. A riveting pause-resister packed with nonstop action, epic ideas, and astonishing twists.

Ripped from today's headlines, Unidentified is the latest thriller from the NY Times best-selling author whose books have sold more than two million copies.

Between 2017 and 2021, the US military admitted to having undeniable evidence that UFOs (now UAVs or UAPs) are here and defy the laws of physics. When Jason Ramsey, a popular science-fiction writer, becomes obsessed with the subject, he undertakes a relentless quest to uncover what is really going on. After recruiting Tessa Barrett, an extraordinarily talented mercenary, Jason devises a risky, desperate plan to get to the bottom of it all. But the truth is far more shocking, convoluted, and dangerous than anyone could have guessed, and he has no idea who he can trust.

Jason soon realizes that he can only be certain of two things. He somehow holds the key to the future of the galaxy itself...and his chances of living out the week are vanishingly small.

What listeners say about Unidentified

I don’t like writing negative reviews because literature, like food, is subject to personal tastes. However, this is not a quality product.

This book is juvenile. The author goes to great lengths to over explain every situation, the characters are one dimensional, the situations are ridiculous, and the story is flat. That’s the good news. I was actually cringing during every point where the grade-school scheme was revealed as a master sinister diabolical super-sophisticated Alien AI triple-x unsurmountable plot - only to be foiled by the protagonist wielding a surprise counter (yawn). Having this happen 17-25 times and it gets a bit repetitive. Everyone spoke with the same diction and really odd adjectives. Men, women, aliens, semi-aliens, multiple AI’s created by different aliens - did everyone go to the same little school in Canada during the 60’s?

Lastly is the reader. Readers have a tough job. The tone he used was a breathless relentless pace. Now - he may have been asked to use that by the producers - and the book did not change pace - so he may have just played the cards he was dealt. BUT, his voicing and accent skills were excellent!

So there you have it. If this were a pre-teen book, I would give it high marks.

I was excited about this book. I love the idea and plot but the story was just poorly crafted. The corny love story was so bad. Everything was incredibly predictable. It felt like I was reading a high school students essay submission or something. My eyes hurt from rolling so much.

Trite, even for middle school

Narration made it passable. Must get past unbelievable premises at each stage to progress to the end. I love sci-fi but, this was phoned in

The prologue was so promising and the authors discussion at the end was so interesting, that I suspect the story was written by somebody else. The dialogue was amateurish and plot points were over explained, again and again, by characters pausing in the middle of action to recite lines that spelled out the plot. So disappointed! But still A fan of many of his other books!

If you’re looking for a story with a plot twist, with three or four more levels amongst those, then this is the book for you. I truly enjoyed the 1st person perspective, and the use of government confirmed truths that have been made public. I love how the author transitioned to his fictional creativity, and used the lore of ufology to create a immaculate weaved story that wants you to believe, or at least be curious. Like any great book, if it can make you question what you know and don’t know, the book did its job. At the end of the day…. It was a great fantasy!

Story wasn't worth the time and the narrator had the wrong voice/presentation, I guess. He has a great voice but just not for this story. It felt kinda juvenile or light through the narration. But the story was vapid and lame anyway.

This is the third or fourth book I’ve read from the author and it has all the twists/turns and fast pace as advertised. My problem is something I also observed in the books from Dan Brown….the underlying plots are very similar to each other, sort of like being written from a formula. Yes the settings are different but there really isn’t that much difference if the background is South America or the South Pacific.
In every case, it’s a protagonist with an understated female accomplice that continuously pulls his bacon from the fire.

I don’t think I will do it again.

A great Sci-fi classic that fans will enjoy!

I started reading Douglas E. Richard’s books about a decade ago. I am so happy his books were not overpriced and his writing is amazing. This book has many exciting places and sequences that I suggest you just read it and enjoy.

Not his best work

I’m interested in UFO’s but this had me jumping ahead toward the end. I’ve enjoyed his other books. I challenge Mr Richards to write a book and not use the phrase “He paused to let that sink in”. Narration was enjoyable.

I really enjoyed many aspects of this!
Great touch incorporating an author's journey and struggles and skills: I'd love to read a novel about some epic contest, warped reality show, or psycho's whim pitting several best selling authors against each other in a quest for survival.

It's fascinating indeed that so much official disclosure and declassification is out there (foos, galactic federation contact whistleblower, project blue beam etc) and yet the public largely doesn't realise or believe.

The narrator was really great, though I always find romantic, lovey-dovey exchanges a little hard to take when ANY narrator puts on the voice of the opposite sex... and I'm an Aussie so had to cringe-laugh at Nick's accent :) nice try mate x
ps is that Roo View place real?! If so it's practically on my doorstep yay.

Hi guys, a very enjoyable book. interesting concept and well written. I could have done without the Harry potter ending, they were defeated by ❤️, really.

Just couldn't get past that anyone would give that much credence to a podcast, let alone an agency from another country.

Great story , however I don’t ever remember hearing a worse Aussie accent! Sounded like a kiwi/yank sometimes, other times I couldn’t even tell what it was . Horrible.