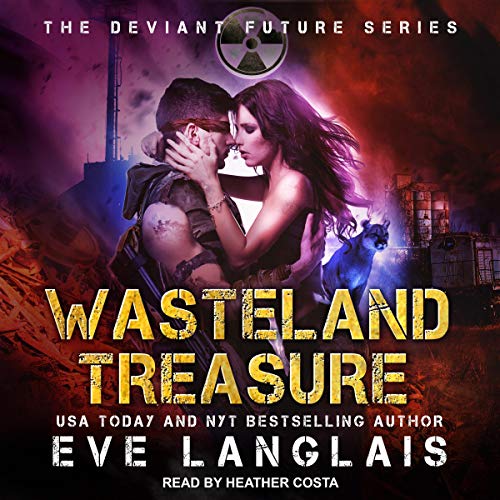 In a Deviant Future, the world has been reshaped. Humanity has been changed. Yet despite it all, one thing does survive - love.

New Earth isn't a kind or gentle place, so Gunner isn't entirely surprised when a freak windstorm leaves him blinded in a strange place. At least he's not alone.

Sofia might have been banished, but she enjoys the freedom of living by her own wits and rules. When a handsome stranger shows up needing help, she agrees if he'll give her the one thing she's always wanted: a child.

Before Gunner can make good on his end of the bargain, a calamity sends them fleeing right into danger. The monsters aren't what defeats them, though. They end up captured, unwilling guests in a strange new city with a self-proclaimed king.

Since a dungeon isn't Gunner's idea of a forever home, he's breaking free, and when he does, he's bringing Sofia with him.

If they survive, will Sofia get the child she wants? Or will they both crave something more?

What listeners say about Wasteland Treasure

Book 2 of the Deviant Future series and just as good as the first! Full of magical powers, monsters, and of course humans, both good and evil. Plenty of laughter and danger as Gunner and Sophia try to reunite with Haven.

2nd book in the Deviant Future series. Best read after the first for the back ground world building although this one stands alone for the specific characters and romance.
Post-apocalyptic adult romance. Maybe a touch science fiction or paranormal for the varieties of life and magic that results from the earth catastrophes.
It is a adult romance because the hero and heroine are clearly adults although the sexual tension and content is light and mostLy near the end.

I enjoyed the world building in the first book and it was expanded here. This book leans more towards the magical than the abnormal that mostly occurred in the prior.

The heroine, Sofia, is strong and independent. She has learned how to live and protect herself in the wild with the aid of a pet feline. Cougar maybe? It’s amusing throughout how Sofia and Gunner play off each other. And Gunner is swoon worthy. He quickly figures out to maneuver while being blind and protecting Sofia at the same time. He is able to quickly read a situation and finds Sofia beautiful and irresistible before he can even see her.

It was a fast adventure that was enthralling from beginning to the end.
I can’t wait for the next book.
As usual, if you don’t like a cliffhanger, don’t read the last page in the epilogue. Those last few paragraphs switch over to the next hero and heroine in the series.

I alternated between a paperback copy and audio. The audio was narrated by Heather Costa who did a great job on the alternating voices.