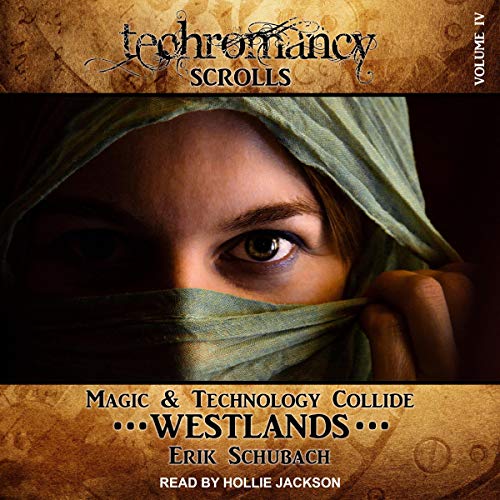 Almost 3,000 years after an extinction-level event on Earth, mankind seeks to regain its former glory in a new world where magic and technology collide.

Laney and Celeste, Templars of Sparo, embark upon a mission of mercy to a far-off land to aid a people thought lost to time before the Altii even found the Lower Ten.

The Westlands are found along with a new enemy that Sparo may not be able to stand against: Avalon.

Can this new threat be the Great Wizards of the Before Times? New alliances will be forged, and hearts will be held and broken as Laney faces her biggest challenge yet.

What listeners say about Westlands

Enjoying the mental vacation of listening to this series during the pandemic and pre election madness of 2020. Wholesome and satisfying.

The auther still over uses the same words like mother Luna. He also loves saying the same info time and time again still. we get it she was a peasant, and yes the nobles and politics are bad we get it stop saying it ever dive mintues.

the story just loves telling us the same things over and over as if we were small children who can not remember things.

over all it's a simple tale and still enjoyable but the author still has lots of room for improvement.


the main characters are idiots not taking the weapons at the end. there were to morally good to use guns even thou swords are way more brutal.

there way to optimistic. it's painful. honestly they should have lost that fight for so many reasons even thou they have magic.

if it had been guerrilla war they could have won believable but hey.

this story is all about these unrealistic characters fun but the world building is painful I'd u think about it.

WESTLANDS like the rest of this series is just wonderful Hollie Jackson did a good job as always she brings every character to life and makes a really good story just wonderful .

A good continuation from the previous book, and boy does it continue to give. A great listen, and I cannot wait to see how the story continues in the next one.

Laney Herder and Celeste Trapper find themselves hip deep in trouble again. Would Celeste's martial arts be enough? Would Laney's heart cause political problems? What do you think! Erik and Holly do it again.

Another great job by Hollie Jackson, delivering many great accents for the book. Erik Schubach delivers another solid story as Laney Herder.
I would recommend listening to the series in order, as many characters come back from their previous adventures with Laney.

Laney and company travel across the inhospitable lands to rescue the lost 13th band of gypsies. Only they encounter an opposing force armed with machines that spew black smoke and weapons that dispense death from afar.
Poor Laney must face the fact that her sight can't save her this time. Yet she still steps up to defend those who cannot defend themselves. Even if it will cost her everything.

Another cute virtuous adventure, with a few flaws in the vagueness of how things are defined. A main criticism I see people have is that the knights beat the soldiers. Avalon isn't the modern Army or Marines. They're pretenders. Their guns fire lead pellets not modern armor piercing rounds. I was upset about Laney pulling bullets from the air until I realized that. But it's never said just what the guns are, so it's easy to mistake.

The power of magic is frustratingly ill-defined, though. We're constantly told one thing, but shown another. Laney creates a magic sword and recharges several batteries after catching bullets and squishing gun barrels one day, but says plucking guns out of people's hands the next is a taxing deed. "Mother Luna!"

And yeah, the constant anti-politics/anti-war thing is annoying. Like, I agree with you, stop beating me over the head with it.

Good book. May I ask one thing before the release of the next book? Please stop Laney's the constant "Mother Luna" expletives, and childish fist shaking at everyone? It's getting really old. Otherwise, good work!

Magic character's grabbed me as usual!

I've loved the main characters in this series from the beginning... Laney and Celeste are such a fab combination together.. they are always the opposites that the storyline needs. This didn't grab me quite as much as the first 3 in the series, but I still thoroughly enjoyed all the mixture of gypsy and knightly traditions and cultures, especially as it introduces a modern aspect to the ongoing background story, one that will get even more interesting no doubt. I've already bought book 5 and book 6 in the series, and am looking forward to both!