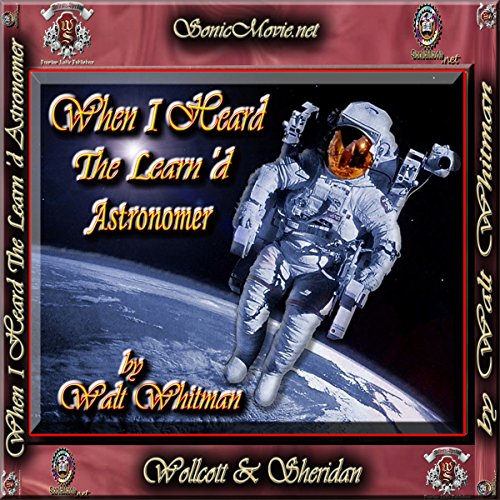 When I Heard the Learn'd Astronomer

A man, tiring of an astronomy lecture, takes a walk in the mystical night air to renew his sense of purpose.

What listeners say about When I Heard the Learn'd Astronomer

This poem is NOT read by Neil Armstrong or Frank Borman. Their voices appear as brief NASA recordings made during their lunar missions. Obviously, had the the poem actually been read by the two astronauts, it would have been a wonderful recording.

What was most disappointing about Walt Whitman’s story?

The readers of the poem were not Armstrong and Borman. Plus, the music got to be a little tedious.

Would you be willing to try another one of the narrators’s performances?

What character would you cut from When I Heard the Learn'd Astronomer?

Do not buy this recording. It is not what it is implied to be.

my first review and sad to say my review is negative for this audiobook. do not buy. this got to be my worst audiobook purchase to date and will try to get a refund.

I'm not sure why poor sound quality was mentioned, one has to take into account the many years and decades that have gone by since the Space monologue, and that being from Space automatically turns the quality down a couple of notches. I loved having the historical messages from the astronauts at the beginning and end with the poem recital in the middle. The narrator was perfect and paced and did a great job. Also, liked the poignant music in the background. I liked everything about this.