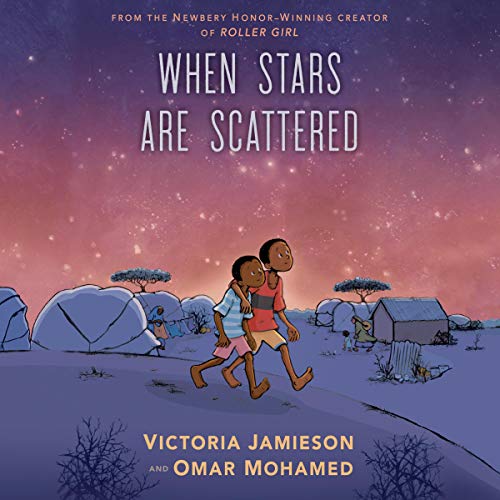 An Odyssey Honor audiobook and National Book Award Finalist, this remarkable graphic novel - adapted for audio - is about growing up in a refugee camp, as told by a former Somali refugee to the Newbery Honor-winning creator of Roller Girl.

Omar and his younger brother, Hassan, have spent most of their lives in Dadaab, a refugee camp in Kenya. Life is hard there: never enough food, achingly dull, and without access to the medical care Omar knows his nonverbal brother needs. So when Omar has the opportunity to go to school, he knows it might be a chance to change their future...but it would also mean leaving his brother, the only family member he has left, every day.

Heartbreak, hope, and gentle humor exist together in this graphic novel - now adapted for audio - about a childhood spent waiting, and a young man who is able to create a sense of family and home in the most difficult of settings. It's an intimate, important, unforgettable look at the day-to-day life of a refugee, as told to New York Times best-selling author/artist Victoria Jamieson by Omar Mohamed, the Somali man who lived the story. This audiobook is performed by a full cast and includes music and special effects.

Christine Avila as Susana Martinez
JD Jackson as Hassan and Jeri’s Dad
Filsan Said as Nimo’s Mom, Sadiya, and Little Nimo
Dion Graham as David
Samba Schutte as Abdikarim and The Man who Finds Hassan
Hana Robleh as Mama
Abdi Iftin as Abdikarim’s Dad and Salat
Susan Duerden as The Reporter
and Steve West as The Cameraman
with Omar Mohamed reading his Author's Note
and Victoria Jamieson reading her Author's Note

"...Omar's story conjur[es] memorable and sympathetic characters who will stay with readers long after they close the book.... This engaging, heartwarming story does everything one can ask of a book, and then some." (Kirkus, starred review)

"With this sensitive and poignant tale, Jamieson and Mohamed express the power of the human spirit to persevere." (School Library Journal, starred review)

"Tragedy is certainly present throughout the story, yet Mohamed and Jamieson's focus on deep familial love and education works to subvert many refugee stereotypes." (Horn Book, starred review)

What listeners say about When Stars Are Scattered

5 Stars for When Stars are Scattered

Enjoyed this book. It was enlightening and eye opening to how others live in this world that many people take for granted.

Fantastic novel! I highly recommend reading this with a class or child to have some great discussions.

This audiobook is the best! Bought for my 4 year old to listen to on a road trip, but my husband and I found it to more moving and entertaining then she. I teared up a lot. His story makes you realize how good we have it. Listening to the afterword to gain resources to help is a must.

I loved the details of Omar’s life and that he was willing to share it! I hope his family is reunited one day! Can’t wait to share with my class and allow them to see a different way of life!