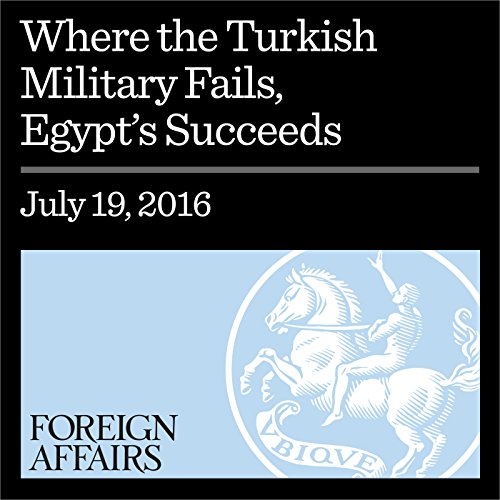 Written by: Steven A. Cook
Narrated by: Kevin Stillwell
Free with 30-day trial

In a half-decade of extraordinary moments in the Middle East, images of citizens swarming tanks and other military vehicles have been among the most arresting. Within the emerging iconography of the era are photos from early July 2013 that capture overjoyed Egyptians celebrating that the military had emerged from its barracks to depose the country’s elected president, Mohammed Morsi, ending the Muslim Brotherhood’s year-long experiment in governance. The intervention reaffirmed the military’s prestige, influence, and authority in the Egyptian political system. Last Friday night, similar scenes played out in the streets of Istanbul and Ankara.

"Where Turkey's Military Fails, Egypt's Succeeds" is from foreignaffairs.com, published on July 19, 2016.

What listeners say about Where Turkey's Military Fails, Egypt's Succeeds