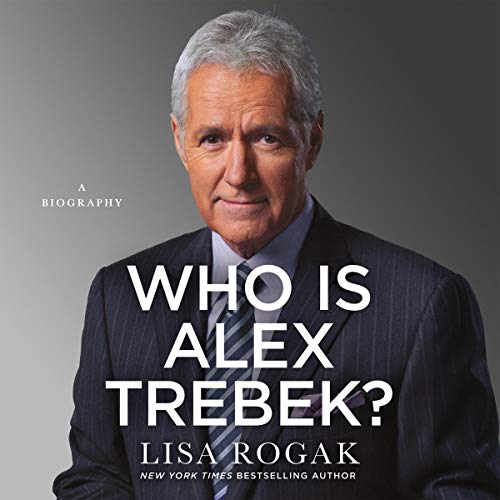 Who Is Alex Trebek?

After a contestant wrote "We love you, Alex!" as his Final Jeopardy! answer, fans around the world quickly chimed in to proclaim their own love and support for beloved Jeopardy! host Alex Trebek. In the wake of his devastating cancer diagnosis, the moment provided the perfect opportunity to reflect on what the show - and the man - meant to them.

It was no surprise, since millions of devoted viewers have long considered Alex Trebek to be a part of their daily lives ever since he began hosting the show in 1984. Now, best-selling biographer Lisa Rogak gives listeners a look at Trebek's early life, his career, and his personal life throughout the years, drawing on many sources to tell his full story for the first time.

There are many surprises, like the fact that Trebek was almost 50 when he discovered that he had a half brother, as well as the revelation that for a short time he actually dreamed of becoming a priest. The native Canadian also struggled with depression after the failure of his first marriage, and for years afterward he despaired of ever having a family of his own until he met the woman who would become his soul mate.

Who Is Alex Trebek? is the first biography of the much-loved game show host and as such celebrates the man who has created a remarkable legacy that will live on in popular culture for generations to come.

What listeners say about Who Is Alex Trebek?

Not the author’s story to tell

Well, when he heard about it, Alex didn’t like it so he decided he’d show her, and he wrote his own book—-it is his life, after all—-and he even (sticking the knife in deeper) arranged to have his book released on the same day as hers!

I took the bait, curiosity getting the better of me (and I had extra points), so I listened to both books. Alex’s book wins hands down.

Rogak, since negativity sells, exposes a few somewhat unsavory details of Alex’s life, but upon learning those, I felt she had no business telling them, and I had no business knowing them. And she gets at least two details wrong: 1) She says that Alex adopted his first wife’s daughter. He says he thinks of the then-girl as a daughter but never formally adopted her. 2) Rogak says Alex started wearing a hair piece due to his cancer treatment when in his book he says he started a year or two earlier to hide scars caused by surgery on his head. These are two inaccuracies—-no way to tell how many others.

So, buy her book if you please, but you’ll be better off just buying Alex’s. (And he’s giving all HIS profits to charity, another knife.)

As Wonderful as he is!!

Alex Trebek has been my favorite for years. My friends and I love him and watch Jeopardy everyday. Alex’s story is just as good as we all had hoped it would be! Great idea to have Ken Jennings read most of it. As my friend said she love, love, loved it. Thanks for the lasting gift to all of us.

nice performance was a five star performance.really great and I liked it will recommend to a friend