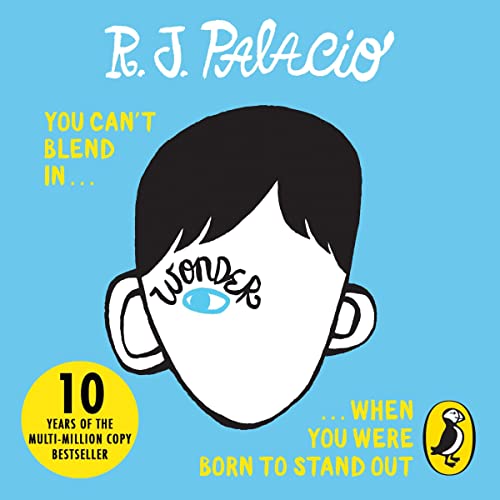 Read the award-winning, multi-million copy bestselling phenomenon that is Wonder.

'My name is August. I won't describe what I look like. Whatever you're thinking, it's probably worse.'

Auggie wants to be an ordinary ten-year-old. He does ordinary things—eating ice cream, playing on his Xbox. He feels ordinary—inside. But ordinary kids don't make other ordinary kids run away screaming in playgrounds. Ordinary kids aren't stared at wherever they go.

Born with a terrible facial abnormality, Auggie has been home-schooled by his parents his whole life. Now, for the first time, he's being sent to a real school—and he's dreading it. All he wants is to be accepted—but can he convince his new classmates that he's just like them, underneath it all?

A funny, frank, astonishingly moving debut—and a true global phenomenon—to enjoy in one sitting, pass on to others, and remember long after the final word.

"Has the power to move hearts and change minds." (Guardian)

"Tremendously uplifting and a novel of all-too-rare power." (Sunday Express)

"An amazing book...I absolutely loved it. I cried my eyes out." (Tom Fletcher)

What listeners say about Wonder

Great story, wonderful character development and nice to read the perspectives of the other characters! As a teacher I think all young people should read this. With my parent hat on, I would recommend it to parents too.

Kids and adults alike should read this.
Read it with my boys when 7 and 9. Very much helped them going forward with empathy and in school.