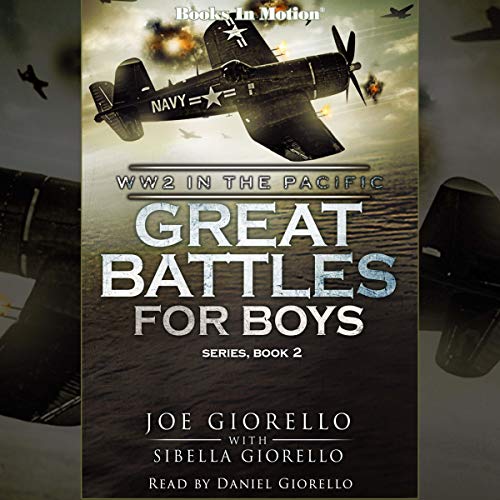 World War 2 in the Pacific

Does your child play video games for hours but dreads picking up a book? Do they think history is just a bunch of boring old facts? What if you could give them all the excitement of screen time but also spark their love of reading and history? You can with these exciting tales of military battles written especially for boys who are reluctant readers. Popular history teacher Joe Giorello's hugely successful class, "Great Battles for Boys" is now an engaging and best-selling non-fiction series written for boys ages 8-14. Great Battles for Boys takes kids to the front lines of iconic battles.

In this volume of the popular history series, find out which strategies, weapons, and military leaders won - or lost - these famous American fights. And none of it's boring. Why was the Battle of Wake Island called “The Alamo of the Pacific”? How did the Navy learn that planes could take off from ships? What happened to the young soldiers who landed on strange islands like Guadalcanal and Iwo Jima only to find themselves fighting a brutal enemy?

World War II in the Pacific opens with the Flying Tigers, when Americans were covertly fighting Japan even before the bombing of Pearl Harbor. From there, in chronological order, the battles move through the Pacific. From that surprise attack in Hawaii that nearly wiped out the American Navy to the deadly “island hopping” strategy that led to eventual Victory Over Japan, history will never look the same. If your child likes action-packed accounts, authentic details, and short but exciting chapters, then they'll love this audiobook. And they'll never hear history as boring again!

What listeners say about World War 2 in the Pacific

Great listen for kids of ANY gender, not just boys

My 11 y/I son LOVES U.S History! His favorite time in our country's history is WWll. The battle of D-Day was initially what sparked his interest, he wanted to learn each and every thing about WWll that he could. I initially purchased this book as well as the WWll Battles in Europe paperbacks on Amazon a couple years ago. However my son has ADD and as a result his reading comprehension is not good so he can't remember what he reads and is continually rereading the first few pages over and over. I am an avid audible listener and have listened to a few hundred books in the 8 years I have been a member. I decided to download the audible app on my son's tablet and cell phone. We started him out with an I Survived book and because his listening comprehension is 100 times better he was able to remember.

This was the second book I bought him and he really loved this book. He loved this book so much he listened to it in one day, and then he listened to it again the next day. The only criticism is in the title. It should not be gender specific. Girls like WWll and battles also the title makes it sound as though it's a book for boys only. Great Battles for Boy's and Girl's has a nice ring to it. Great Battles for Kids also. Other than the title this is a great book that's not only entertaining, it's also teaches them about what our soldier's had to endure during WW2. As well as valuable information pertaining to the battles on the Pacific.