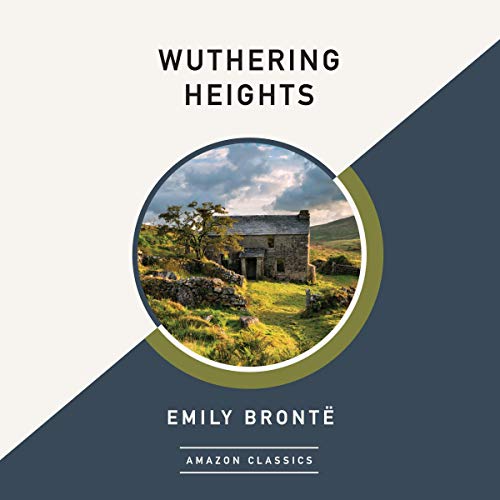 Featured title on PBS's The Great American Read in 2018

Raised together on the Yorkshire moors, Heathcliff and Catherine become lovers and soul mates so utterly inseparable that their destiny seems inevitable. But when Catherine's desire for social status results in her marriage to Heathcliff's wealthy rival, Heathcliff is consumed by revenge. And no one in his path will be spared.

Admired for its stark originality and condemned for its fiendish affront to the senses, Wuthering Heights polarized critics. For generations of readers since, its themes of gender inequality, religious hypocrisy, social climbing, and the violent extremes of romantic obsession resonate to this day.

I've always loved this book. It seems a dark and dreary story, but yet so beautiful in the eloquence of the story and the building of each Character! I absolutely loved every moment of the book and feel somewhat sad that it is over!!

Good Narrative. I don't care for the story

The narrators did a fine job, I do appreciate them though I had a hard time listening to this classic because it's certainly not a happy story nor full of good people. I don't care for soap TV nor housewives. I can appreciate the good writing, but I don't enjoy the themes of darkness, cruel characters lashing revenge; though that lesson does ring true throughout our lives. Those depressed and sour you might understand have become to be that way by an equally sour hand.

The audiobook is excellently read. After finishing I wonder why it is known as a great book. Every is first class, yes. It's the story that I had expected for more.

There was a lot of glitches in the audio that caused a discourse I didn’t notice until I played it without my earbuds.

Very sad, with inhumanity and humanity in the same person

Glimpses into the inhumanity in some people, who desire to torment others for pleasure. And yet at times those same inhumane people have hearts, which show their vulnerability at times. This story also reveals the selfishness that can grow in the heart so easily.
Excellent narration. I was only confused once or twice as to who was speaking. A man narrates Lockwood’s part, and a woman narrates the tale told by Mrs. Dean.

I o not understandnd why iti s listed as must read

The two narrators were perfectly in sync with each other for this reading of a true classic. Very nicely performed, Bronte has been brought back to life in this tale of heartache and misery. Very evocative, would recommend highly.