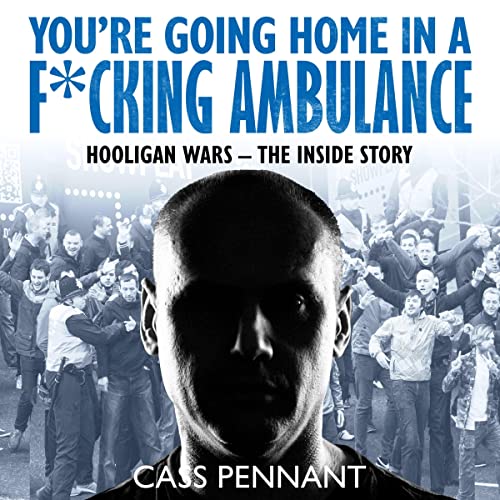 You're Going Home in a F--king Ambulance

In his latest book, bestselling author Cass Pennant takes an engaging and unparalleled look at some of the most volatile and violent scenes of fans following their football clubs to have unfolded over the past five decades, and examines the lengths to which many will go to put one over their local rivals.

Here is history that also examines everything from the changing face of football violence, to who gets involved—and why. It looks, too, at how the' firms' operate, both home and away, and at the effects of the football establishment's often counter-productive attempts to contain hooliganism on the psychology of supporters.

Has the war on hooliganism been successfully stamped out? Can it ever be won? This remarkable and informative book gives a frank examination of football violence to show how different inter-club and inter-regional rivalries have evolved—and features many first-hand accounts of incidents that make chilling reading. It builds up to provide the most comprehensive look behind the match-day madness and the activities of some of British football's most notorious hooligans, to give answers as to why these games are so important to supporters.

The history of such infamous 'firms' as the ICF, the Bushwackers, the Headhunters and the Red Army has never been fully documented...until now.

You're Going Home in a F--king Ambulance is an eye-opening study of a problem that refuses to go away, by a writer who knows his subject inside-out.

Fantasy, half truths and exaggerations. The narration is hilarious, he only knows one Northern accent and doesn't even bother with the Geordie one, just does a standard cockney.
Respect to Cass but this should be in the fiction section.
This should be the book to end all hooligan memoirs.

This book is a very good listen for thoes who like this genre. It seems to be a honest and accurate amount for all sides.

Gripping From Start to Fonish

Loved every second of it , real in depth look into all the football firms. Definitely worth a listen

i enjoyed this immensely

when you can relate to the reality and facts of a book it becomes more likely that you'll enjoy it more. I certainly did. FEC NFFC

An Authentic History of Football Fanatics

I'm not a big reader these days, accessing this on Audible is fantastic. This book takes you on a journey from the late '60's with the unique perspectives of different club's supporters in their own words and their experiences, covering rivalries, fashion and of course pre and after match malarky, it isn't sensationalist, it's just like you've been fortunate enough to be sitting with the right company in a pub at the right time and are hearing about your cultural history from those who lived through and made it, as I'm just over 50 it was great to hear the history, I always presumed stuff like this just started in Aberdeen in the '80's 😉 I jest, honestly, well worth a listen, top notch.

Average not great not terrible

This book is ok , it's well read and there are some interesting stuff. some of the stories are clearly exaggerated. No way 3 people fought 20 odd etc and does go a bit ott about the clothes and fashion side. I probably won't re listen but it's ok if your into this sort of stuff

Nothing new here, if you’ve read Top Boys etc and all the other books, it’s all the same, regurgitated stories if you like this type of book it’s ok, 3 stars from me bit of a yawn fest

Didn’t work as an audio

Wished I brought this as proper book rather than audio. Felt it didn’t work with the same voice trying to tell other peoples stories in their words.