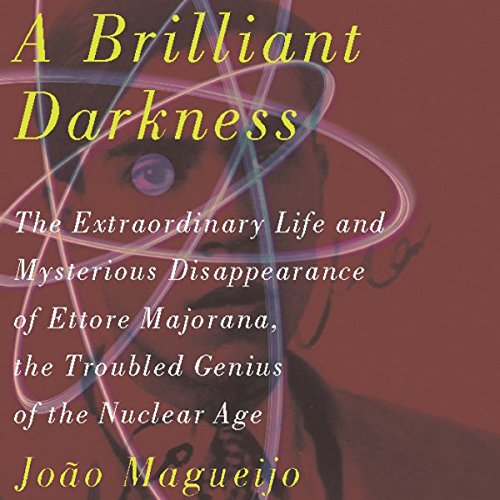 On the night of March 26, 1938, nuclear physicist Ettore Majorana boarded a ship, cash and passport in hand. He was never seen again.

In A Brilliant Darkness, theoretical physicist Joo Magueijo tells the story of Majorana and his research group, the Via Panisperna Boys, who discovered atomic fission in 1934. As Majorana, the most brilliant of the group, began to realize the implications of what they had found, he became increasingly unstable. Did he commit suicide that night in Palermo? Was he kidnapped? Did he stage his own death?

A Brilliant Darkness chronicles Majoranas invaluable contributions to science, including his major discovery, the Majorana neutrino while revealing the truth behind his fascinating and tragic life.

What listeners say about A Brilliant Darkness

Magueijo A BRILLIANT DARKNESS not so illuminating

It is good to hear of Ettore Majorana. The over-breezingly, if not sloppily, written text disappoints. Maguielio seems to have "learned" much about Majorana by way of gossip and cafe table talk, so it's hard to know what's substantiated and what's not. One virtually gets the impression that although Majorana published virtually nothing his genius thought of "everything." It's good to have the history of nuclear physics, but it's disappointingly sketchy. It's generally well-known that Enrico Fermi was not the brightest/deepest, which Magueijo emphasizes _ad nauseum_. It's quite as if Magueijo wrote this book to correct the (false) impression we get of Italian physics from Fermi, by creating an Italian genius who Magueijo comes just short of saying outranked Einstein, Bohr, Heisenberg, Pauli... The breezy narrator brings out the faults of the book. I'm sure there's a good story there, but Magueijo didn't tell it.