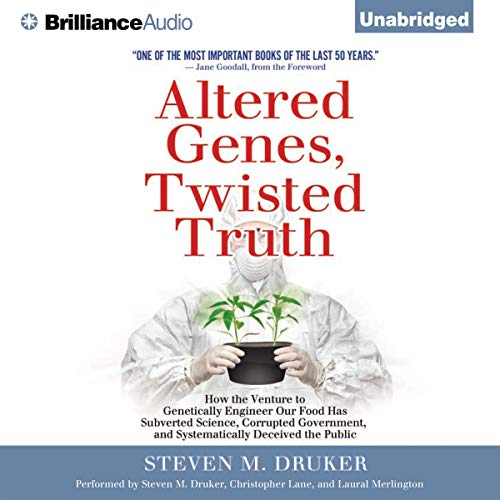 This audiobook uncovers the biggest scientific fraud of our age. It tells the fascinating and frequently astounding story of how the massive enterprise to restructure the genetic core of the world's food supply came into being, how it advanced by consistently violating the protocols of science, and how for more than three decades, hundreds of eminent biologists and esteemed institutions have systematically contorted the truth in order to conceal the unique risks of its products - and get them onto our dinner plates.

Altered Genes, Twisted Truth provides a graphic account of how this elaborate fraud was crafted and how it not only deceived the general public, but Bill Clinton, Bill Gates, Barack Obama and a host of other astute and influential individuals as well. The audiobook also exposes how the U.S. Food and Drug Administration (FDA) was induced to become a key accomplice - and how it has broken the law and repeatedly lied in order to usher genetically engineered foods onto the market without the safety testing that's required by federal statute. As a result, for fifteen years America's families have been regularly ingesting a group of novel products that the FDA's own scientific staff had previously determined to be unduly hazardous to human health.

By the time this gripping story comes to a close, it will be clear that the degradation of science it documents has not only been unsavory but unprecedented - and that in no other instance have so many scientists so seriously subverted the standards they were trained to uphold, misled so many people, and imposed such magnitude of risk on both human health and the health of the environment.

How is it that while Monsanto is a much smaller company than Exxon, it can afford to buy an overwhelming majority of scientists and regulators to lie to us about the how safe GMOs are? How is it that Exxon, BP, Shell, and the Saudis, who are orders of magnitude bigger and more powerful than Monsanto, are not able to buy a majority of scientists to claim that there is no global warming?This book did not explain this but it did bore me to tears.

This is a great book!!

I have always wondered why there is so much ignorance on the topic of GMO foods. This book explains why.

What was one of the most memorable moments of Altered Genes, Twisted Truth?

The fact that 9 of the FDAs own scientists have questioned whether GMOs are safe based on science and that not one American media outlet would report this fact.

This book is so full of facts on the history of how GMOs have become accepted in this country. It reads like a a conspiracy novel, because it is a conspiracy.

Yes it made me cry to hear the story of how our regulatory agencies fail in their duties to protect the people and the envirinment.

This well researched book provides plenty of evidence that genetically modified foods may, indeed, be dangerous. I suggest the reader check the list of countries banning genetically engineered. Crops . Then, after reading this book and the references. Become active in moving the U.S. Away from the model of Profit trumps health.

What can I say without anger tainting what should be the most glowing review I have ever written.
This is the most well written book I have ever had the privilege of being exposed to, yet it has troubled me like nothing else before.
I do not possess the articulate mind, the gilded tongue, or the proficient vocabulary to express the level of impact this book has had on my soul.
Every adult human capable, should attempt to consume the wealth of revelation contain within this presentation. However, it should be done with caution, as the level of disclosure revealed herein is not for the troubled of spirit or faint of heart.
It WILL make you angry.
You will be horrified to learn that we (in the US and in many other geographic locations throughout the world) have literally forced, without our knowledge, to play a game of high stakes Russian Roulette, involving countless men, women, and children.
People need to be in prison, yet judges play dumb or are literally incompetent.
My heart is almost... Poisoned with sorrow and disdain.
The knowledge of the betrayal that this book reveals is catastrophic, and altogether damning of those complicit in these CRIMES against humanity.
The Author of this book, and those scientists and other persons who have stood against these crimes are heros of the highest order, and should be recipients of not only the Nobel Peace Prize, but honors from all the government of the world.
I personally hold Steven Druker, and those who stand with him in the highest esteem and consider them a heros without peer.

Good basis for understanding where we were before

CRISPR. It is already out of date, but this information will be a good foundation for understanding continued technology.

If you could sum up Altered Genes, Twisted Truth in three words, what would they be?

This book is one of the best I have ever read on the GMO dangers and issues.
The hidden data and the oversights and lies are serious and demand we stay vigilant on this issue .

This book is at once shocking and revelatory. Though the issues discussed are heady and complex, Dr. Druker sensibly and clearly lays open his well reasoned points and discoveries in an impassioned way.
His case is solid and the implications are mind blowing.
Don't be intimidated by the volume of hard science in this book. Even those unfamiliar with the controversies inherent in GM crops will learn a lot from this book.
Everyone should read this book. And if they do we will undoubtedly see a much needed correction of course in how our society values the health and food security of our citizens.

ek-spair-a-ment. I can’t stand to listen to this man continually say ek-spir-a-ment.

Crucial read for everyone worldwide and description of what GM really means...outstanding contribution to the disclosure of truth and corruption of our food production ,and much more...!
Greatly appreciated , thank you very much 🙏

Bad science, ignored science and science unduly swayed by money and politics are exposed here in a very thorough unveiling of the history of GMOs and where we are up to today.

Key topics are highlighting the difference between breeding plants and altering their genes, how imprecise genetic engineering is, the terrible incidents that have occurred in the past when scientists have sought to line their own pockets rather than admit their lack of knowledge, how language has been manipulated to obscure the truth about GMOs and most importantly the vast complexity of how genes work, interacting with one another in ways we cannot possibly predict, and the hidden dangers of processes such as epigenetics that we really do not understand.

Most revealing is the complete lack of vigorous scientific evidence for GMOs most of which have not been studied at all and those that have only over a comparatively short term.